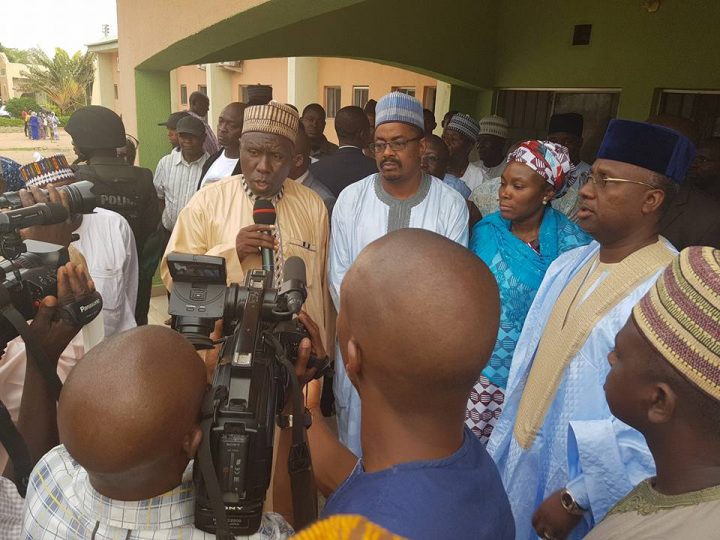 Governor of Adamawa State, Sen Mohammed Umar Jibrilla, has appealed to people of the state to donate free blood to the victims of Mubi bomb blast who are receiving treatment at the Federal Medical Centre in Yola.

SA Media and publicity to the Governor, Macauley Hunohashi said the governor suspended the weekly state executive council meeting, which is traditionally slated for Wednesdays, and led members of the state executive to commiserate with victims of the bomb blast.

He described the dastardly act as, “comdemnable, unfortunate, cowardly and uncivilized”.

Sen Jibrilla stated that government has already deployed a medical team to join other volunteers that are providing medical care to over fifty victims in Mubi.

He expressed appreciation to the management of Federal Medical Center Yola and the Red Cross Society for their prompt action in attending to the victims.

He noted that, “one of the victims had died earlier while being conveyed to Yola and two are in critical condition, while the others who are stable are responding to treatment”.

In his remark Commissioner of Information and Strategy, Comrade Ahmed Ibrahim Sajo, appealed for continuous screening at places of worship.

He warned that, “when there is a blast, people should not rush to the scene but should allow medical and security experts to discharge their duties of handling the situation”.

This, he said, “would guard against heavy casualty as a result of the second blast, as was the case in Mubi”.

Chief Medical Director of the Federal Medical Center Yola, Professor Muhammad Auwal, said, “medical personnel including volunteers and members of the Red Cross have been deployed to handle the situation”.

He gave assurance that, “the center is capable and I can assure you that the situation is under control”.