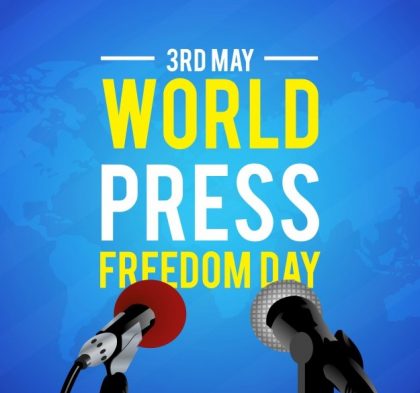 As part of the activities marking the 2018 World Press Freedom Day, the Nigerian Guild of Editors (NGE) on Thursday called on the government to create an enabling legal environment for press freedom.

The Guild, in a statement in Lagos, also recognised the efforts of media practitioners, in spite of challenges.

“On this auspicious celebration of the 2018 World Press Freedom Day, we bring warm felicitations to our colleagues and friends across the country and around the world, as they continue to shine the light of truth on humanity.

“It is also an occasion to congratulate all journalists around the world especially those in Nigeria and indeed, Africa, on their resolve to weather the storm to remain afloat, in spite of harsh economic conditions and environment,” it said.

The News Agency of Nigeria (NAN) recalls that the World Press Freedom Day was proclaimed by the United Nations General Assembly in December 1993, following the recommendation of UNESCO’s General Conference.

The objective was to raise awareness on the importance of freedom of the press and remind governments of their duty to respect and uphold the right to freedom of expression, enshrined under Article 19 of the 1948 Universal Declaration of Human Rights.

Since the Declaration of Windhoek, the anniversary is celebrated annually worldwide as World Press Freedom Day on May 3.

According to the NGE, the 2018 edition calls for sober reflection as it also affords practitioners the opportunity to assess the state of press freedom and state of the media in the country.

It also presents an opportunity to empathise and pay tribute to journalists who have lost their lives in the course of performing their constitutional responsibility, as well as those in different prisons all over the world.

The 2018 celebration was themed: ‘Keeping Power in Check: Media, Justice.’

“We join all well-meaning organisations, such as the United Nations (UN) to call on the government to create an enabling legal environment for press freedom.

“We call on the government to give special attention to the role of an independent Judiciary in ensuring legal guarantees for press freedom and the prosecution of crimes against journalists.

“It is also important to mention that impunity and all forms of oppression and molestation must stop. More importantly, governments must begin to treat the Media as an ally in development and nation building,” the NGE stated.

The group pointed out that the history of Nigeria cannot be written without a mention of the role the media played in the struggle for independence, the enthronement of democracy and promotion of social justice and human rights.

“Having acquitted itself thus, its operators and indeed, journalists, do not deserve to be treated with anything less than respect and decorum in the course of performing their Constitutional responsibility,” the Guild said.

It called on governments and the political class to recognise the role of the Media in sustainable development, especially during the forthcoming elections — as a watchdog fostering transparency, accountability and the rule of law.

“We reiterate the fact that it is the responsibility of governments and relevant institutions to protect journalists from physical harm and intimidation.

“Regrettably and in all fairness, all is not well with the Media industry in Nigeria. The cost of production materials is having a devastating effect on daily operations and the survival of the Media in general.

“This development, no doubt, has affected payment of monthly emoluments of media workers, thus creating an atmosphere of uncertainty and in effect, reducing the general morale of journalists in the country,” the group stated.

The NGE also lamented how the media industry had supported all other sectors of the economy, but was left to bear the brunt of everything that has gone wrong with the economy.

The statement read in part: “We are losing revenue and forced to reduce manpower.

“It is important to call the attention of all on a day like this that a nation whose economy does not and cannot support the economy of its media industry cannot thumb its chest that its press is free.

“A broke Media industry has no press freedom and is, therefore, far from being free, for as long as the economic shackles are firmly in place.

“On our part as members of the Fourth Estate of the Realm, we must collectively play our role in the interest of the generality of Nigerians whose trust we hold by maintaining and observing the highest professional and ethical standards in total compliance with the Code of Ethics of the Journalism profession.

“We must not allow agents of retrogression to use our platforms to preach hate and extremism under the guise of free speech.

“We call on the government and security agencies to reopen and urgently resolve all pending cases of attacks and killings of Journalists and Media workers in the country and bring perpetrators to book, to serve as deterrent to others.”

The group however, condoled with the families of colleagues who paid the supreme price in the course of service.

“We celebrate all our colleagues who have continually defied the odds to shine the light into the darkest places, hold government accountable to the people and tell compelling stories about our communities and nation.” (NAN)