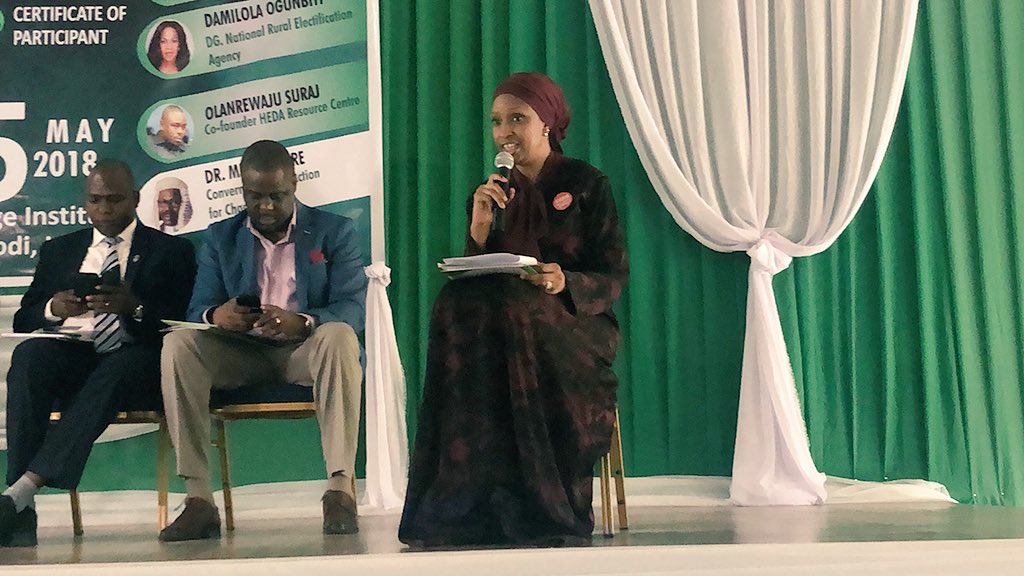 Youth As The For-bearers of The New Nigeria – MD, Hadiza

I want to thank the board and members of the United Action for Change for the kind invitation extended to me.

I associate myself with every effort made by young people and those who have elected to mentor them in the huge task of ensuring national integration and development, so I congratulate you for this step.

I think a good place to start our discussion this morning is to try to agree on who a youth is? My experience in the past couple of years is that for reasons that are peculiar to our country, the idea of who a youth really is has become rather blurry.

And I think that the only way to properly situate the role of the youth in national development is to put the qualification for that status in its proper perspective.

Although the United Nations Educational Scientific and Cultural Organisation (UNESCO) says youthfulness is an attribute of people who are in the 15 and 24 age grade, the African Youth Charter says that youth means “every person between the ages of 15 and 35 years.

In essence, anyone above the age of 35, should not be referred to as a youth. However you find a lot of Nigerians in their 40s and 50s, even 60s going about in the garb of youthfulness.

On the surface of it, this looks harmless but when we consider the various ways that this appropriation deprives those who legitimately belong to this demography of opportunities, we would see the overall impact of this aberration on national development.

I have been asked to discuss the topic: The Youth as forbearers of the new Nigeria.” And in considering the importance of this topic, I arrived at the conclusion that we are saying that the youths are the hope of our country.

It is a general consensus that needs not much debate that Nigeria is not in the right place at the moment but there is a place that we all desire the country should be.

The Nigeria that we hope for would be the one where the peoples’ diversity would be deployed towards shared prosperity and welfare of all. Where the educational, healthcare, food security, leisure as well as human rights requirements of all citizens are assured.

Now, none of these realities are attainable in a sustainable way without the enormous possibilities that technology and innovations offer.

Gone are the days when countries thrive on the advantage of commodities & natural endowments, countries that count in the present & coming world are those who are able to explore the illimitable potential of innovation to improve the conditions under which people live, work.

The statistics portal, http://statista.com reported that Google’s total revenue in 2017 amounted to 109.6 billion US dollars.

Facebook, the social media network also had a gross revenue of 40.7 billion US dollars in 2017 whereas our country’s entire budget projections for 2018 is a total of $23 billion!

This is a clear indication of the fact that the prosperity of nations in the future would not be about natural resources but the creativity of their peoples.
So who are these people who will be in the future of nations but the youth?

Apart from the fact that young people are by nature, the ones who would move nations into their future, there are physiological and psychological endowments that give them the edge over people who have seen more years.

The youth is blessed with energy and the spirit of innovativeness that future societies cannot do without. Youths have the capacity to precipitate change and improve on situations, set objectives and focus on achieving results even as they are more easily receptive to feedback.

History, even of our country would show the role that youths have played in shaping the destiny of nations. Professor Wole Soyinka, who would later go on to win the Nobel Prize for literature wrote his first major play, The Swamp Dwellers at 24!

This was followed by the hugely successful Lion and the Jewel one year later and Dance of The Forest in 1960 when he was 26! Same goes for Professor Chinua Achebe, whose magnum opus; Things Fall Apart was accomplished at 28.

Same can be said of some First Republic politicians. Chief Obafemi Awolowo’s book Path to Nigerian Freedom was published in 1946 when he was freshly called to bar. He set up the Egbe Omo Oduduwa one year later in his 30s.

At age 30, Dr. Nnamdi Azikwe had become a household name in most of Africa while Sirs Ahmadu Bello and Abubakar Tafawa Balewa formed the Northern People Congress (NPC) in their 30s.

What I am saying is that youths have at some time in the history of our country played very prominent roles in their areas of endeavor.

The youth can even be more strategic in the future of Nigeria because they remain a quantum of Nigeria’s population at the moment & even more so in the future.

Although politics is central to the formulation of policies which drive the development of societies, youths must strive towards rounded self-development and be becoming skillful and the best at whatever they choose to do.

There is a general consensus that the older generation is unwilling to quit the stage for younger ones and there may be some truth in this.

I look forward to more fidelity to the National Youth Policy, 2009 which represents what the country intends to provide for the development of its young in accordance with the African Youth Charter, Commonwealth Youth Charter as well as the @UN World Programme of Action for Youth.

The youth of a country is the evidence of its strength and political and economic leaders must be deliberate in preparing our youth for taking over the reins.

However, the question we should ask ourselves is how much efforts are young people making to be the best at what they do and compete for relevance.

As Ahmad Alhendawi, the youngest Secretary-General of the World Organizations of the Scout Movement to have ever been appointed usually says, there can be “nothing for young people, without young people.”

In other words, no one will willingly quit the stage for youths unless the youths themselves decide to roll up their sleeves and get their hands on the plow without not looking back. 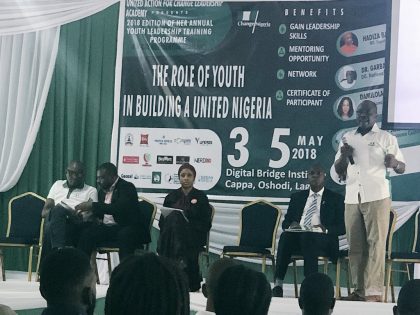 In hoping to achieve results, however, there must be the essential ingredients of preparations.

I have suggested that Nigerian youths must be in every sector of the economy to hope to contribute to the future of Nigeria.

If we agree with this proposition, education is a very critical element of the preparation. Youths must acquire skills that make them competitive not just in Nigeria but amongst their peers from other parts of the world.

And for people who aspire to be in politics, you must, in addition to education, develop a sense of service. A corollary to that is that you must be ready to start from very humble beginnings.

Let me give you two examples of what I am talking about from the United States.

Take Senator Hillary Clinton who wanted to be President at 69. That lady has a record of close to four decades of public service. President Obama became President at 46 in 2009, but his active public life started at the age of 24!

At the age of 31, in 2007, I contested for a seat in the House of Representatives in Katsina State, this is after years of active participation in political activities in my community.

We must, therefore, cultivate the sense of service to the people over personal ambition and the acquisitive sense.

As youths who aspire to lead Nigeria into a new era, we must develop a deep sense of righteous living and contentment, none of which can happen without self-worth and self-control.

Essential life skills that need to be developed also include the capacity to work under pressure, work with other and make decisions that reflect a deep understanding of the situation. Potential leaders must also learn to read and be attentive listeners.

Most importantly, youths hoping to do well for Nigeria in the future, however, must be ready to unlearn one ailment that currently sets Nigeria back.
Such youths must train their minds to be nationalistic.

They must avoid the manipulations of warmongers and ethnic and religious jingoists who peddle divisive narratives for their own selfish interests.

Many of those who wield religious sentiments, dragging our youths into unnecessary conflicts, believe in no god but their stomachs and their pockets.

But when it is time to play politics or fight for some other selfish interests, they bring up these sentiments, camouflaging them as collective joint interest and thereby dividing us.

It is time for youths across Nigeria to realize that they have a common destiny and that until they see through the manipulation of these selfish people, we restrain the development of Nigeria.

The pride of Nigeria is in its diversity and the new Nigeria must be one in which leaders employ the things that bind us together efforts to limit the fault lines and the divisions that they bring.

There can be no greatness for Nigeria if every citizen of the country cannot feel at home whether they are in Sokoto, Ilorin, Lagos, Uyo or Aba. The onus to ensure that we have a country where every single Nigeria can proudly call home lies in the hands of the youth.

This can be achieved by developing a cosmopolitan mindset, which abhors all forms of discrimination and prioritizes merit, honesty, hard work and loyalty to our fatherland. This is where the redemption of our country lies and the onus for this salvation rests on our youth.

Thank you for listening and God bless.