President Buhari Returns to Abuja after Official Visit to U.S

President Muhammadu Buhari on Thursday night returned to Abuja after a successful official visit to the United States where he held bilateral talks with President Donald Trump. 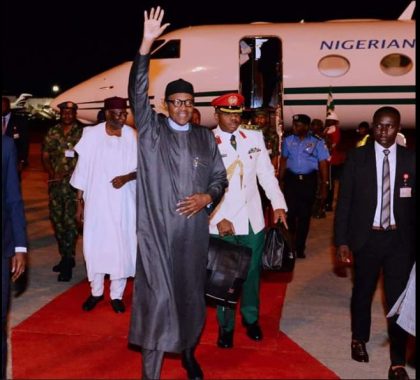 Among those who received the president at the airport were the Minister of the Federal Capital Territory, Malam Musa Bello, Chief of Staff to the President, Malam Abba Kyari and some heads of security agencies.

President Buhari was accompanied on the US trip by the Governors of Ogun and Plateau; Ministers of Foreign Affairs, Justice, Industry, Trade, and Investment.

Also on the entourage were the Chairpersons of Senate and House of Representatives committees on international relations; Director-General, National Intelligence Agency and the Chief of Defence Staff.

The president’s Special Adviser on Media and Publicity, Mr. Femi Adesina had earlier today dismissed social and traditional media reports on the whereabouts of the president, who had a technical stopover in London.

An online media outfit, Premium Times, had on Thursday reported that “Buhari yet to arrive Nigeria two days after leaving the U.S.’’

Other traditional newspapers had also reported (online) that the president was yet to return to Nigeria after his official visit to the U.S.

Malam Garba Shehu, who also commented on the matter, said the president’s aircraft had a technical stopover in London.
“I am sure if you keep your ears to the ground, you will hear of his arrival soon,’’ he added

He further explained that “the big jet is under repair. It has been taken for major repairs. So the President is using a small plane and there is a limit to the distance the small plane can cover.

“This is very normal. There is nothing unusual about it. In any case, they are already on their way back home.

“It is a routine thing. The plane can do Abuja-Washington, that’s about 12 hours and the maximum the plane can fly is 12 hours, 40 minutes. But you don’t need to push it to the edge.’’(NAN)