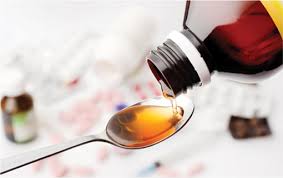 The codeine-based syrup is used in the treatment of a cough, but when abused could lead to harmful and deadly addiction.

In a  statement by NAFDAC on Monday, Director General of the Agency, Prof. Mojisola Adeyeye said that the clampdown was due to the companies’ inability to provide required documents for NAFDAC officials during the inspection of the facilities at Ilorin and Lagos.

“Due to insufficient evidence gathered and apparent resistance to provide needed documents during an inspection on May 2, 2018, at the respective companies in Ilorin and Lagos, respectively, it has become necessary to shut down all product lines of the three companies.

“This is to allow for a full and comprehensive investigation; the three companies, therefore, remain closed,’’ the statement said.

“On May 2 and 3, a  team of nine NAFDAC officers were sent to carry out an investigational inspection at the companies that are licensed to manufacture codeine-containing syrup, and which were implicated in a BBC documentary.

“The focus of the assignment was to access and monitor from records the utilization, sales and effective distribution of the codeine-containing cough syrups to the end users.

“Meanwhile, meeting of the stakeholders mentioned above is being planned while the shutdown and full investigations continue.

“The reopening of the manufacturing companies will depend on the level of cooperation that is shown during the comprehensive investigation,’’ the statement said.

The News Agency of Nigeria reports that the Federal Health Ministry announced a ban on the production and import of cough syrup containing codeine last week.

This was in the wake of a BBC documentary on how codeine-based cough syrups were fuelling an addiction epidemic in northern Nigeria. (NAN)