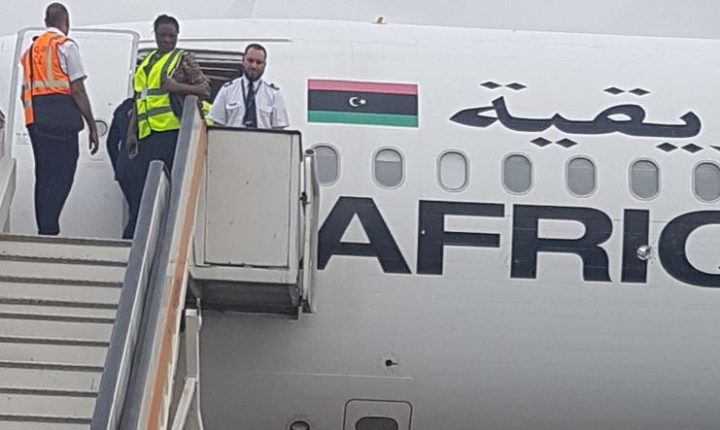 A batch of 218 Nigerians, which included seven pregnant women on Tuesday voluntarily returned from the volatile North African country of Libya where they had been stranded enroute Europe.

The returnees arrived at the Murtala Muhammed International Airport, Lagos about 3.44 a.m. aboard a chartered Libyan Airlines Airbus A330-200 aircraft with registration number 5A-LAU.

The returnees were brought with the assistance of the International Organisation for Migration (IOM) and the European Union (EU).

The South West Zonal Coordinator of the National Emergency Management Agency (NEMA), Alhaji Yakubu Suleiman, said a total of 8,129 Nigerians had returned so far under the EU and IOM Assisted Voluntary Returnees Programme.

Suleiman advised the returnees to be champions of change in sensitising the youths against the urge of seeking greener pastures through irregular migration due to unforeseen dangers.

He assured them that the Federal Government was pursuing socio-economic programmes aimed at giving employable opportunities to the youths.

According to him, the government has intensified efforts at curbing the menace of corruption that has bedevilled the country and denied Nigerians the opportunities to put up their best toward its development.

Speaking to newsmen, one of the returnees, Ms. Titilayo Kayode-Owojori, from Ile Ife, Osun, regretted embarking on the ill-fated journey but thanked God for returning home safely.

She said: “Nigeria is far better than where we thought we could get better lives. The Libyans live with the sweat of the blacks.

“If the Arabs see us working and collecting wages, they wait and burst our houses to collect the money. If they don’t see any money, they will kidnap us and ask us to call Nigeria to send us money to free ourselves. If we can’t raise money, we will be sold or imprisoned.”

The returnee, therefore, urged the government to fulfill its promise of creating an enabling environment for Nigerians to thrive in order to reduce the urge to seek greener pastures outside the country.