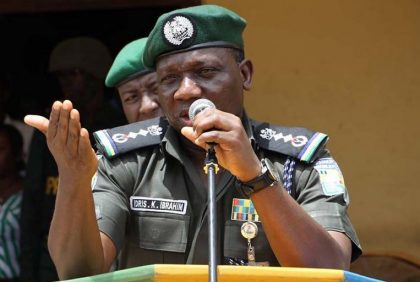 The Inspector General of Police, Mr Ibrahim Idris has called on Nigerians to support President Muhammadu Buhari’s fight against corruption to put the country back on the path of greatness.

Idris made the call at the customary dinner organised for the Economic and Financial Crimes Commission (EFCC) Detective Superintendent Course (7) 2017/2018 at the Nigerian Defence Academy, Kaduna.

He said the feat achieved by the EFCC with the recovery of looted funds under the leadership of  the Acting Chairman, Ibrahim Magu, could not have been possible without the support of  Mr. President.

“Without the support and prompting of Mr President, the achievement made by the commission would not have been possible.

“Mr president has zero tolerance for corruption and I urge all Nigerians to support him to carry the fight to its logical conclusion,” Idris added.

The IGP, while congratulating the 314 cadets who successfully completed the 13 months training course, charged them to exercise high sense of professionalism and courage in carrying out the task ahead.

“You have been called upon to join the anti-corruption crusade of the President, Commander -in-Chief of the Armed Forces of the Federal Republic of Nigeria; as such, you must be professional, committed and courageous in the fight.

“This is the only way you can guarantee your service in the commission,” he said.

He warned them against temptations in the course of their job, urging them not to pervert the course of justice for monetary and material rewards.

“I advise you to be above board and resist all the temptations.

“You must be contented with your salary and allowances and know that being an officer of the EFCC does not make you immune to arrest and prosecution if found wanting,” Idris said.

He said that the Police would continue to partner with the commission to ensure that all those who looted the treasury and diverted funds that would have been used to develop the economy were arrested and prosecuted.(NAN)