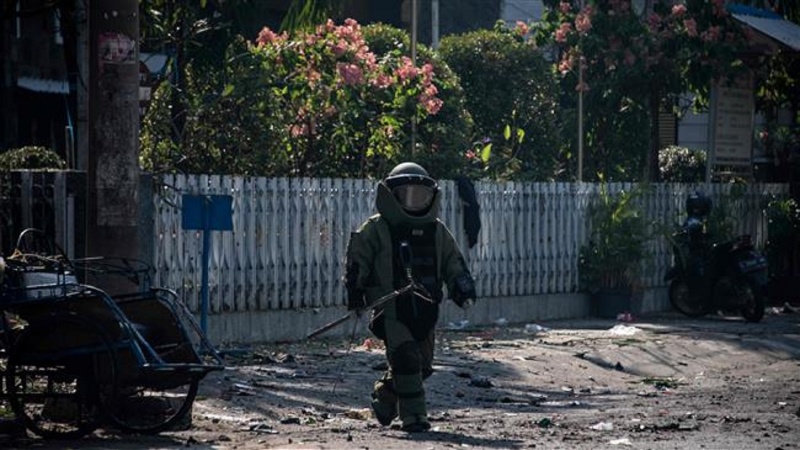 A suicide bombing at a police headquarters in the Indonesian city of Surabaya on Monday was carried out by a family of five riding on two motorbikes, police say.

It came after another family carried out bomb attacks on three churches on Sunday, in an attack claimed by the Islamic State (IS) group.

Indonesia is the world’s most populous Muslim-majority country.

The archipelago, home to 260 million people, has seen a resurgence of Islamist militancy in recent months but the scale of the attacks in Surabaya has raised fresh concerns about the potency of jihadist networks.

Video footage of the latest attack on the police headquarters shows two motorbikes approaching a checkpoint just before the blast. Six civilians and four police officers were injured, the authorities say.

The young girl who survived had been wedged between her mother and father on the motorbike as they carried out the attack.

What preceded the latest attack?

Indonesia was on high alert after bombings on Sunday by a single family targeted three churches in Surabaya, the capital of East Java province.

The mother targeted one church alongside her two daughters, aged nine and 12, while the father and two sons attacked two other churches.

The incident represented the first time a female suicide bomber had successfully carried out an attack, national police chief Tito Karnavian said. A 28-year-old woman had planned to bomb the Presidential Palace last year but was caught and jailed, he added.

The authorities originally said the family of six were among hundreds of Indonesians who had returned from conflict-hit Syria but have since said the family did not actually travel there.

The coordinated attacks killed 14 people and injured more than 40. They were the deadliest bombings in Indonesia in more than a decade.

Police say the father, Dita Oepriarto, was the head of a local branch of Jemaah Ansharut Daulah (JAD), an Indonesian IS-inspired network.

Six members of the same family carried out a series of attacks on Sunday 13 May:

3. A mother, with her two daughters, carried out a bomb attack on Diponegoro Indonesian Christian Church a few minutes later

There was another suspected terror-linked incident on Sunday night:

4. A bomb exploded at Rusunawa Wonocolo flats, Sidoarjo regency at around 21:00 local time

A second family carried out an attack on Monday 14 May:

5. The family of five rode motorbikes to a checkpoint at Surabaya police headquarters and detonated bombs at 08:50 local time

The bomb that exploded on Sunday night in an apartment killed three members of a family who police said may have been planning an attack and had connections with Oepriarto.

What has the reaction been?

President Joko Widodo has described the attacks as “cowardly, undignified and inhumane” and said he will push through a new anti-terrorism bill if parliament does not pass it.

“There will be no compromise in taking action on the ground to stop terrorism,” he said.

Officials said police, backed by military forces, would increase security across the country.

What is the history of militancy in Indonesia?

The South East Asian country has long struggled with Islamist militancy. Its worst ever terror attack was in Bali in 2002, when 202 people – mostly foreigners – were killed in an attack on a tourist nightlife district.

That attack was carried out by the Jemaah Islamiah (JI) militant network.

But recent years have seen a number of attacks claimed by IS:

“To pull off three near simultaneous bombings is hallmark of a group that is thinking.”

• Abdurrahman, also known as Oman Rochman, is serving a nine-year prison sentence but is said to manage his followers, conduct recruitment and spread IS propaganda from behind bars

• JAD campaigns for a caliphate system across Indonesia and says it is “justified in using violence” to do so. The group encourages attacks on the police, which it regards as “infidels”