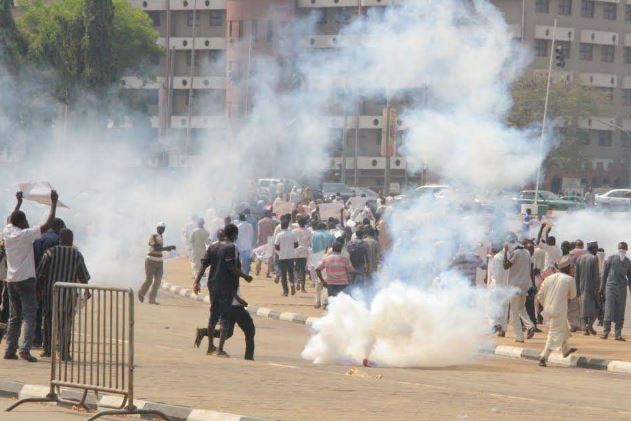 The FCT Police Command has confirmed the arrest of 60 members of the Islamic Movement of Nigeria (IMN) in the territory during a violent protest on Monday in Abuja.

Reports say that the group defied warning from the police and staged the violent protest to demand the release of their leader, Ibrahim El-Zakzaky, who has been in detention since 2016.

The spokesman of the police in the FCT, DSP Anjuguri Manzah confirmed the arrest to newsmen in an interview on Tuesday at the Garki Hospital.

Manzah was in the hospital to see how the two personnel of the command, who sustained a varied degree of injuries while dispersing the protesters, were recuperating.

They are SP Linus Ogah, who had bruises on his face and could hardly speak or open his eyes, and Insp. Mary Ameh, who sustained injury in one of her hands.

The spokesman said that bullet had been removed from Ameh’s hand, adding that the protesters also destroyed some police operational vehicles.

“During the Monday protest, members of IMN or otherwise known as Shiites engaged police and haul stones at police personnel deployed to disperse them.

“They also smashed some vehicle glasses parked around the Federal Secretariat,” he said.

On April 16, the police had arrested 115 members of the sect when they embarked on a similar violent protest to demand that their leader should be freed.

Manzah, who said that though citizens had right to protest, advised that they should do that in a “civil manner’’ and not disturb the public peace.

He said that the command had taken proactive measures to check violent protest in the territory.