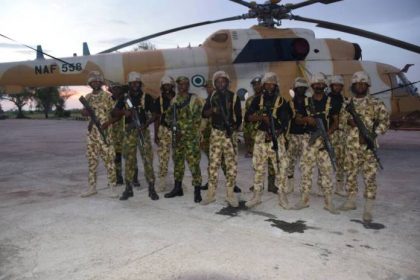 The Nigerian Airforce has inaugurated no fewer than 456 Special Forces (SF) as part of its efforts to boost the security of the country.

The Air Commanding Officer (AOC) Ground Training Command, AVM Samson Akpasa made the disclosure on Wednesday during the inauguration ceremony of students of Force Protection in complex air-ground environment course 6.

The News Agency of Nigeria (NAN) reports that the 302 Special Forces were drawn from regiment training centre, while 124 were drawn from air police and 30 from Intelligence Unit.

Akpasa said that the NAF would continue to project air power for decades to come as the country face persistent security challenges.

“As you are aware, this country has been characterized by persistent security challenges and regional tensions arising from militancy, herdsmen /farmer’s clashes, banditry, cattle rustling, cultism, insurgency and terrorism have continued to create uncertainty, political upheaval and sectarian violence.

“This is the environment in which the NAF will continue to project air power for decades to come.

“Consequently, protection of NAF assets and other key national assets are vital aspects of NAF responsibilities.

“The NAF under the leadership of Air Marshal Sadiq Abubakar understands the complexity of security situations and how best to positively influence the potential battle space, especially areas adjacent to air bases which is the core objective of base defence operations,’’ Akpasa said.

The AOC said that a world where the nature of threats was becoming complex, highly trained and motivated forces with sophisticated weapons were required to respond to hostile situations.

He added that the regiment training centre would continue to conduct training and also oversee training conducted by foreign military training organisations to produce highly professional and disciplined forces.

Earlier, the Commandant Regiment Training Center, Grp. Capt. Isaac Subi said the course was aimed at inculcating in the student’s tactics, techniques and procedures essential to conserving the fighting potential of ground forces.

Subi said that the current leadership had been judicious in the use of scarce resources in the defence of national interest.

“The Nigerian Air Force has constantly sought avenues to evolve a sound doctrine and build the requisite capabilities to match our roles whether conventional or otherwise,’’ he said.

Also, the Commander of BMATT, Wing Cmdr John Risse assured that they would continue to assist in building the capacity of the air force to secure the nation and play a key role in sub-regional and global levels. (NAN)