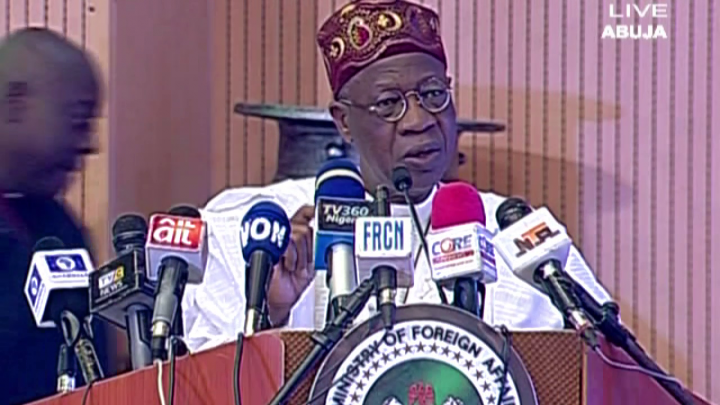 The Minister of Information and Culture, Alhaji Lai Mohammed says the increase in clashes between farmers and herdsmen are as a result of criminality, demography, environmental, social and economic dynamics.

Mohammed made this known at a special edition of Town Hall Meeting focussing on the clashes between farmers and herdsmen, with a view finding lasting solutions to it.

Panelist at the meeting include Governor Abubakar Bagudu of Kebbi and six other ministers and in attendance by stakeholders from all walks of life.

Mohammed noted that those giving ethnic and religious reasons for the clashes were distorting facts and deliberately doing that to fan embers of disunity.

Explaining the demography cause of the clashes, the minister said “in 963, Nigeria’s population was 52 million but today, it is about 200 million, which is four times the old figure.

“Yet, the land space has remained the same,
or has even shrunk if we take into consideration the effect of desertification, to which Nigeria loses 400,000 hectares of land every year.

“Against this background, the contest for land and other natural resources is bound to be keener, and the friction, more!

“Today, most of those people have moved south in search of greener pastures, further exacerbating the contestation for increasingly scarce natural resources – and the resultant friction’’.

Mohammed said the criminal activities especially by cattle rustlers which had aggravated the clashes also debunked the argument that the challenge was ethno-religious.

He said that those who rustle cattle and the owners of the cattle they stole are Muslims and most times belong to the same ethnic group.

The ministers identified various measures taken by the Federal Government to stop the killings and curtail the criminality that had fuelled the clashes and other acts of insecurity.

He said Nigerian Army recently inaugurated two Battalion Forward Operation Base, in Birnin- Gwari, while the Air Force deployed its Special Forces to the newly-established 23 Quick Response Wing in Taraba.

Mohammed said NAF also has a 1000-man Special Intervention Force deployed to Makurdi to degrade bandits and criminals in Benue and Nasarawa States.

He said NAF also deployed drones to flashpoints in Plateau while the Directorate of Military Intelligence established a Fusion Centre, an intelligence analysis hub.

The minister said that President Muhammadu Buhari approved N10 billion for the rehabilitation of communities affected by violent attacks.

He noted that significant arrests had been made in connection with the farmers-herdsmen clashes including Aliyu Tashaku, who allegedly masterminded deadly attacks in Benue.