The Imo Commissioner for Works, Mrs. Josephine Udoji, has lauded the quality of work being done by contractors executing Federal Government projects in the state. 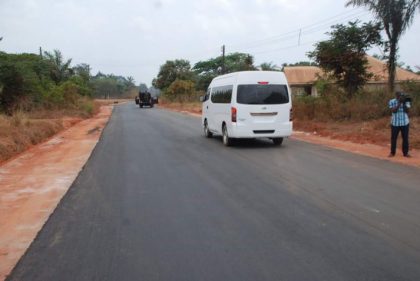 Udoji gave the commendation on Thursday in Owerri during an inspection of ongoing federal projects in the state by the Minister of Power, Work.s and Housing, Mr. Babatunde Fashola.

She said that a team of the state government engineers had been monitoring and inspecting the quality of work since the inception of the projects.

The commissioner said the idea was to ensure that the contractors worked according to specifications, adding that there had not been complaints by the state supervision team.

“We are satisfied with what they are doing; my engineers are here and we have been visiting the site; so, they are working according to specifications,” she said.

In his remark, Fashola advised the contractors to be mindful of the convenience of road users at the various projects, adding that the roads would not be shut down because of ongoing work.

“As you are prepared to work on strategic sections that would require diversions, there is need to make local communication effective, so that the people will not be taken unawares,” he said.

He said one of the objectives of the Federal Government in embarking on infrastructural development was to create employment opportunities for the teeming youths in the country.

Mr. Anthony Animaku, the Federal Controller of Works in Imo State, said that Section 1, Phase 1 of the Ikot-Ekpene-Abia-Owerri dualization project was awarded in 2012 to Arab Contractors.

He said the 11.26km project from Owerri axis was 50.5 percent completed, adding that with the current pace of work, it would be completed in December.