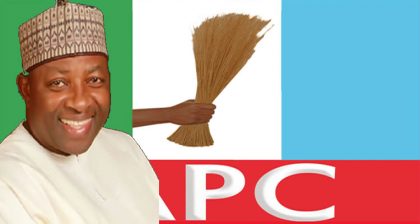 The All Progressive Congress (APC) State Delegates Congress in Bauchi was held under tight security to forestall any crisis.

The News Agency of Nigeria (NAN) reports that the venue of the APC state congress was beefed up with both uniformed and plain-clothed security agents.

NAN reports that the state congress election took place in spite of court injunction secured by the Speaker of House of Represntatives, Yakubu Dogara, and six others, restraining the party from conducting the exercise.
‎
The Police Command Public Relations Officer (PPRO) DSP Kamal Datti, told NAN the beefing up of security at the venue was “normal” in any political function.

“It is normal to beef up security at the venue of any political functions in the state.
‎
“That is why you see security agents in all strategic areas and corners of the venue and the city.
‎
“If you look at the venue of the congress, it is not only the Police Force in place; all other security agencies are present.
‎
“The ultimate aim is to provide peaceful atmosphere at the venue of the Congress,” he said.
‎
Organising Secretary of the Party in the state, Mr Abdulkadir Gyang, also told NAN that the presence of security agents was to ensure the conduct of the exercise in an orderly manner.
‎
“Our party does not tolerate rancor and violence; that is why we sought for the presence of security personnel to take care of the venue,” he said.
‎
The Chairman of the State Congress Committee from the National Secretariat of the Party, Mr Kabiru Matazu, said all security outfits were notified of the event.
‎
“On our arrival yesterday from Abuja, we visited all the security agencies in the state and notified them because we want a free and fair congress in the presence of all security agencies,” he said
‎

Commenting on the court injunction, State Chairman of the party, Alhaji Uba Nana, who re-contested ‘unopposed’, said the party was yet to be served with the court order.

He described the injunction as uncalled for because the plaintiffs had refused to follow due process.

“By the party’s constitution, if you have any grievances, you complain toward officials; if you are not satisfied, go to local level, before state, and then national level.

“If you are not still satisfied, you can now go to court and then present whatever you want the court to do for you.

“I want to observe that the plaintiffs failed to even complain to the appeal committee set up by the party to entertain grievances at all levels,” Nana said. (NAN)