Christians, Muslims Must Unite Against Killers In Nigeria – Cleric Advises 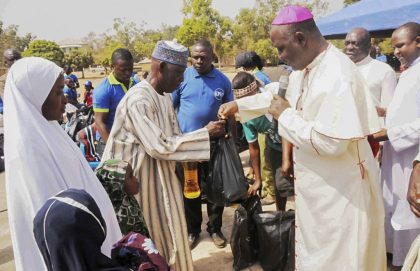 Alhaji Abdulhakeem Yayi-Akorede, the Chief Imam of Akure,  has advised both Muslims and Christians in the country to unite in praying God to expose those perpetrating senseless killings in parts of the country for peace to reign.

Yayi-Akorede stated this on Saturday in Akure during a courtesy visit of the state Chairman of Nigeria Union of Journalists (NUJ), Mr James Sowole, to commemorate the 2018 Press Week of the state council.

The cleric cautioned followers of the two religions to stop apportioning blames over killings in the country, saying that Islam had lost more members to suspected herdsmen attacks and killings than any other religion.

Yayi-Akorede enjoined Muslims and Christians to embark on fervent prayers as the only means to overcome the current killings rather than engaging in utterances or acts that could further breach the nation’s security.

“It is not only the Christians that have been the victims of current killings in the country as thousands of Muslims also lost their lives to the dastardly act of killers in the country.

“A lot of mosques, during prayers, have been bombed and live of Muslims were lost. Islam is a religion of peace and Muslims are peaceful, we should not be seen as killers.

“Rather both Christians and  Muslims should join hands together to pray for sustainability of the peaceful coexistence in the country and on how to get rid of killings through prayers,” he said.

Yayi-Akorede admonished that no religious group should view the killings from a religious perspective.

He, however, prayed God to expose those behind the dastardly act of killing and admonished Muslims to always pray for peace in the country.

The cleric used the occasion to pray for men of the pen profession in the state and urged them to always display professionalism and desist from what could jeopardize the peace in the country by reporting happenings objectively.

The Akure Chief Imam charged journalists to be fair in the discharge of their duties and not mislead public in their reportage.

Sowole also appreciated God for giving journalists the opportunities to witness the annual event of the pen profession in the state and promised responsible reportage of security situation in the country.

The state NUJ chairman, accompanied by some members, also urged religious leaders to always use their sermons to promote peace and educate their followers on best ways of ensuring peaceful coexistence among Muslims and Christians in the country. (NAN)