Metuh Collapses In Court As Judge Threatens To Strike Out Suit 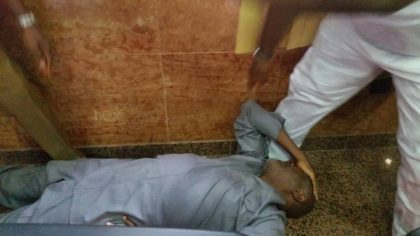 Metuh who `was a walker,’ missed his step and fell down, while attempting to enter the dock when his matter was called.

The judge, Justice Okon Abang, directed that the court should rise for a short while, as the court registrar went to call a doctor.

The judge re-entered, while a doctor and a nurse were attending to Metuh as he was still lying on the floor.

Abang called the court registrar, Mrs Doyin Olawale to relay to the court what transpired before the short recess.

Olawale said: “When the case was called, his lordship said I should tell the defendant to stay where he was and should not bother entering the dock.

“By then, he was already standing up and in carrying out his lordship’s directive, I communicated to the people around him that his lordship said he can sit where he was.

“They were trying to communicate to him, then I heard the sound of a fall,” Olawale said.

The judge also asked the two court clerks, James Omoju and Dorcas Danjuma the same question, and their answer was the same as Olawale’s.

The judge asked Metuh’s counsel, Mr Emeka Etiaba, (SAN) to call the witness, but Etiaba said that although the witness was in court, he could not proceed with the matter given the condition his client was in.

“The sequence of what happened in this court as I saw, is not what I am hearing, the defendant fell while trying to enter the dock when his matter was called. I do not even know whether he is alive or dead.

“But since the court has insisted on going on with the matter, I announce my withdrawal from this case,”Etiaba said.

The doctor, whom the judge identified as an employee of the Federal High Court, spoke to the judge, following which the judge announced that he had asked that Metuh is taken to see his doctor.

In a short ruling, Justice Abang said that the application of Etiaba to withdraw from the case was refused.

He said that Etiaba’s refusal to answer the court’s question regarding the doctor’s request was unethical.

“When learned counsel to the first defendant earlier applied to withdraw from the case, I then asked him whether he opposed the application made by the doctor or not and he didn’t answer.

“In view of the application of the doctor in the employment of the Federal High Court, that was not in court at the commencement of this case, and there being no objection, and since it is a medical opinion, the matter is adjourned until May 22 for continuation.”

Abang also threatened to strike the matter out if the prosecution was no longer willing to continue with it since he did not oppose the application of the doctor who was not in court when the matter started.

“The Federal High Court has nothing to do with this case, it is the prosecution’s case and if you do not want the case to continue, apply that it should be struck out, right here and now I will strike it out.

“After you witnessed what happened in court, you said you have no objection to the application of the doctor, who was not in court when the matter started,” the judge said.

The judge subsequently adjourned the matter until May 22, as Metuh was carried out of the courtroom on a stretcher and taken away in the ambulance of the court.

The News Agency of Nigeria (NAN) reports that Metuh is standing trial along with his company, Destra Investments Limited, on a seven-count charge which involves laundering $2 million.