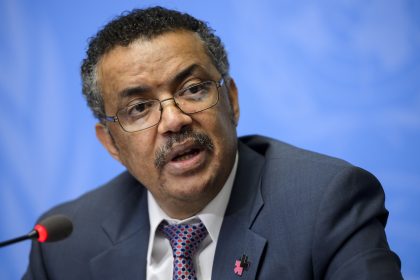 The Director-General of the WHO, Tedros Adhanom, the world is much more prepared now to handle the Ebola Virus Disease (EVD) than in 2014.

Cases of the deadly virus have been confirmed in Mbandaka, a port city on the Congo river, raising concerns that Ebola could spread downstream to the capital Kinshasa, which has a population of 10 million.

“It’s concerning that we now have cases of Ebola in an urban centre, but we are much better placed to deal with this outbreak than we were in 2014,” Adhanom told health ministers at the start of the WHO’s annual assembly.

The WHO’s previous leadership was heavily criticised for its slow response to the outbreak that was declared in March 2014 and continued until January 2016, killing over 11,300 people.

It was later found to have begun in late 2013, but WHO did not call an emergency meeting until August 2014.

This time the WHO has moved rapidly to mobilise the response, convening an Emergency Committee and sending a vaccine to ring-fence the outbreak and stop it spreading further.

“I’m pleased to say that vaccination is starting as we speak today,” Tedros said.

WHO spokesman Tarik Jasarevic said the vaccination of health workers would start on Monday, and people who had contact with Ebola victims would come later.

The latest outbreak is Congo’s ninth since the disease made its first known appearance near the vast central African country’s northern Ebola river in the 1970s.

Tedros said WHO staff and health workers were working around the clock to stop the outbreak, and said he had been impressed by seeing health workers “risking their own lives” in the remote town of Bikoro a week ago, just after the outbreak was declared.

“The outbreak in Bikoro illustrates again that health security and universal health coverage are two sides of the same coin.

“The best thing we can do to prevent future outbreaks is to strengthen health systems everywhere,” Tedros said.

The outbreak has so far killed 26 of the 46 people thought to have been infected, Jasarevic said. Of that caseload, 21 have been confirmed in a laboratory, 21 are regarded as probable Ebola cases, and four patients are suspected of having Ebola.(Reuters/NAN)