Expert Tasks Investors On `Made In Nigeria’ Building Materials 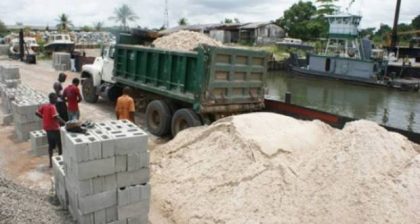 Onwubalili, an Architect and Team Leader, Osun State National Housing Programme (NHP) made the call on Wednesday when the Minister of State II for Power, Works and Housing, Alhaji Suleiman Zarma inspected the NHP site in Abere, near Ede, Osun.

Zarma was on an assessment tour of the Federal Government’s roads, housing and power projects in the South-West Geo-Political Zone in the company of some top ministry officials.

She explained that though from the inception of the programme, they have relied on the use of locally manufactured materials but certain materials were difficult to access or sourced locally.

The expert noted materials like sanitary and lighting fittings and the locks, adding that investors could utilise the opportunity to produce these materials for patronage.

“The cables, doors, windows, tiles, water cistern, marble, kitchen sinks, including the roofing sheets are all locally made.

“But some materials like the toilet fittings, lighting and sanitary fittings and the locks were not manufactured in Nigeria and we have to use imported ones.

“It is a very huge investment opportunity for Nigerians who are willing to go into manufacturing such products, there is need for investors to go into such businesses because there is a prospect.

The News Agency of Nigeria (NAN) reports that complying with the use of Nigerian products and indigenous workforce is a directive from the ministry aimed at promoting local content.

However, she noted that about 2,500 indigenous workforces including skilled and unskilled labourers as well as artisans have been employed and benefited from the programme.

Onwubalili further said that the 68 housing units with 12 contractors would be completed in July, while water infrastructure and electrical project were 90 and 30 percent completed respectively.

She complained of security challenges such as cases of burglary and one attempted armed robbery attack in the site thereby calling for total fencing of the site for security reason.

Zarma, however, commended the Team Leader and the progress of work done so far and the delivery of the projects in the state, adding that the housing construction was a big success story.

Zarma stressed the need to tackle the security challenges rather than calling for fencing of the project.

“We are trying to build a community; we want the community to integrate with the larger community out there so we do not want to build barriers.

“Security is a big challenge but it is not about walling, we will look out for other options and what to do to tackle that the challenge.

“We will look at other ways of securing the premises rather than walling. The money to the wall can give us more housing units that Nigerians desire, fencing, for now, is not in our thinking.

The NHP in Osun state, situated in Abere, Ede North Local Government Area of the state

NAN reports that the minister had earlier paid a courtesy visit to the Gov. Rauf Aregbesola of Osun where he highlighted the objective of the inspection in the state.

He also inspected the construction of Ojutu Bridge in Ilobu, Osun being handled by Preconsmith construction Ltd. at 23.65 percent completion. (NAN)