Most Patients of Adamawa Cholera Outbreak have been Discharged – Official

The Principal Medical Officer (PMO) of Mubi General Hospital in Adamawa, Dr. Ezra Sakawa says most of the 223 cholera patients received by the hospital within the last one week have been treated and discharged. 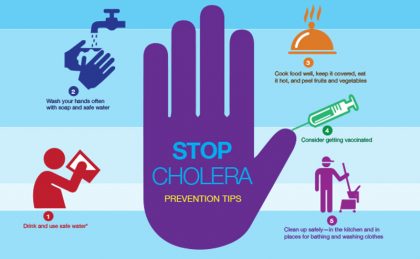 Sakawa made this known while receiving the State Government team led by the Commissioner of Health, Dr. Fatima Atiku who visited the hospital for an on the spot assessment.

“The number of patients now on admission is less than 50,” he said.

Sakawa lauded the state government for it prompt intervention with the support of international organizations like WHO, UNICEF, ICR, and OCHA, adding that with the exception of 12 deaths recorded at the initial stage, no more dead had been recorded.

He cited contaminated water as the possible source of the outbreak and listed Nasarawo, Yelwa and Sabon Layi Wards of Mubi as the worst affected areas.

Sakawa requested for more consumables and diesel to ensure steady power supply to the hospital.

In her remarks, Atiku lauded the commitment shown by the PMO and other stakeholders and assured them of the government readiness to continue to support them.

Also speaking, the Commissioner of Information and Strategy, Mr. Ahmad Sajoh, commended the role played by volunteers in supporting the hospital to cope with the outbreak in view of ongoing nationwide health workers strike describing their role as `noble and patriotic’.

Sajoh urged for more involvement of traditional and religious leaders in sensitizing the public on preventing measures like good personal and environmental hygiene.

The team which also include the State Attorney General and Commissioner of Justice, Mr. Bala Sanga as well as Commissioner for Water Resources, Alhaji Ahmad Rufai, visited affected communities in Mubi to sympathize with them and enlightened them on preventive measures.