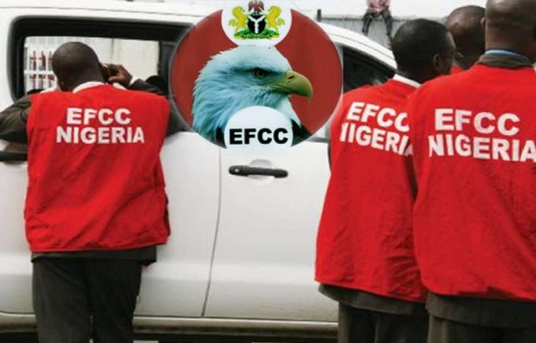 EFCC Recorded Over 647 Convictions From 2015 to Date

The Economic and Financial Crimes Commission (EFCC) on Thursday disclosed that it had recorded over 647 financial crimes convictions from November 2015 till date.
Mr Samin Amadin, the EFCC Head of Enlightenment and Reorientation Unit, Department of Public Affairs, disclosed this at the grand finale of Bounce Corruption debate competition for students of tertiary institutions in Abuja.

Amadin said through the efforts of the commission, senior military personnel, lawyers, judges and many politicians are currently facing trial in law courts for corrupt practice.
“Between November 2015 and November 2017, the commission has recorded 457 convictions.
“From December 2017 till date, EFCC has also recorded another 190 convictions of persons that have deprived Nigerians of their nation’s wealth.
“In less than three years, the commission has also recovered N500 billion from those who have looted the nation’s treasury,’’ he said.
Amadin said it was good that youths in Nigeria had gotten themselves involved in public integrity debates to tackle corruption alongside government.
He said the EFCC would continue to collaborate with youth groups like the Youth Initiative for Advocacy, Growth & Advancement (YIAGA) and the MacArthur Foundation to strengthen anti-corruption fight in the country.
Also speaking, Mrs Cynthia Mbamalu, the Program Manager, YIAGA, organisers of the event, lauded the commission for its successes in the fight against corruption.
Mbamalu said YIAGA was set to mobilise 20 million Nigerians to rise against corruption in different communities in the country.
She said the organisation had in 2017 set up radio ambassadors’ network in each state of the federation and that it would soon launch its social orbit in Local Government Areas (LGAs) across the country.
Mbamalu said the missing link over years was the absence of youths in most governance issues which the organisation was working to bridge.
She said the fight against corruption cannot be left to the government to lead.
“The Bounce corruption debate is to first frame corruption as a social, economic and political problem that needs to be tackled.
“Bounce corruption will build in citizens the consciousness on how dangerous corruption is to them.
“It is to have different citizens to understand the issues of corruption the way it affects them personally,’’ Mbamalu said.
She said the participants were selected from institutions in four geopolitical zones of the country after qualifying levels in each zone.
Mbamalu said it was time young people start to champion corruption fight in the country.