I want to be Africa’s biggest philanthropist – Dangote

Africa’s richest man and Chairman of Dangote Group, Alhaji Aliko Dangote, has said that he would like to be known as the biggest philanthropist on the continent. 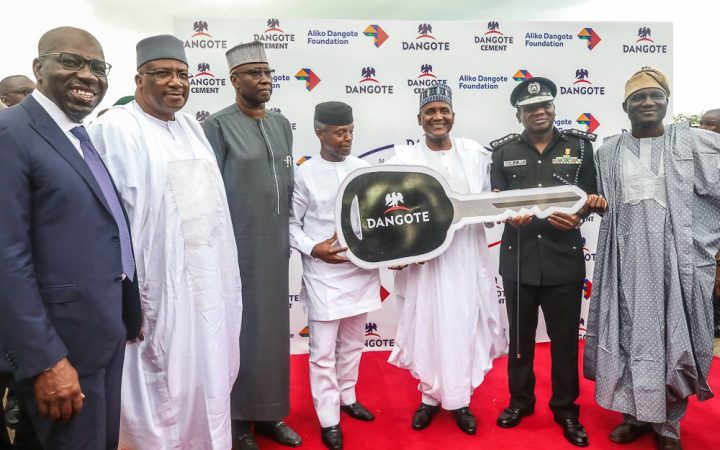 On May 30th, 2018, at the Eagle Square, Abuja, Vice President Prof. Osinbajo received 150 operational vehicles donated to the Nigerian Police by Dangote Foundation.

Dangote stated this on Wednesday in Lafia while disbursing N130 million micro-grant to 13,000 vulnerable and less privileged women in Nasarawa State.

“I do not only want to be known as Africa’s richest man but the biggest philanthropist in Africa. I will continue to use my resources and my voice to help shape a better Nigeria and Africa as a whole,” he said.

Dangote said he started the foundation in 1993 to improve the lives of the less fortunate and make a positive difference in the growth of Nigeria.

He said the four major goals of the foundation were health and nutrition, education, economic empowerment and disaster relief.

He explained that the grant scheme was one of the components of the economic empowerment programme of the foundation.

Dangote said it was aimed at providing disadvantaged and vulnerable women in the country with a one-off unconditional N10, 000 cash transfer to boost their household income generation.

” This we believe will help their vulnerability and meet their livelihood needs,” he added.

He explained that the programme, which was launched a few years ago, was targeted at a minimum of 1,000 women in each of the 774 local government areas across the country.

“It is estimated that we would spend about N10 billion with some states with a large population getting a little bit more.

“We at Aliko Dangote foundation are happy to continue providing support to the most vulnerable and deserving members of the society across the country,” he said.