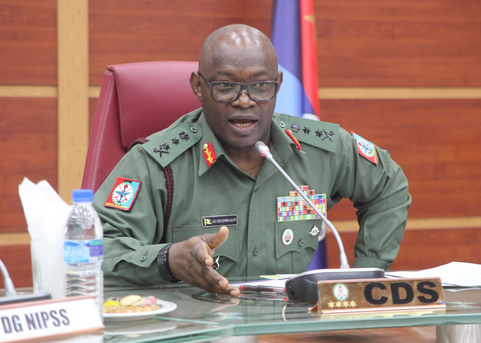 The Chief of Defence Staff (CDS), Gen. Gabriel Olonisakin, has assured Nigerians that the security of oil pipelines remains a priority to the armed forces in the country.

He gave the assurance on Friday in Abuja during a peaceful protest by members of the Niger Delta Environmental Protection Group and Coalition of Niger Delta Civil Society Activists to his office.

Olonisakin also said the Nigerian Army, Air Force and Navy were doing everything possible to ensure the security of Nigerians.

He was represented by Maj.-Gen. Nuhu Angbazo, the Head of Civil-Military Affairs.

Olonisakin said that the constitutional responsibility of the armed forces to defend the country must be achieved.

“We have already sworn to defend Nigeria and we are going to defend her,” he said.

The CDS, however, urged Nigerians to continue to pray for the armed forces and show them support in carrying out their responsibility.

He also advised Nigerians to give necessary information to the military and other security agencies in the country at all times.

“This information will enable us conduct ourselves properly and do our work well in ensuring that Nigerians are secured,” he said.

He expressed appreciation to the group for the peaceful protest and encouraged them to ensure that they remained peaceful.

Mr Tochukwu Ohazuruike, the leader of the group, appealed to the Federal Government to clamp down on activities of oil thieves in oil producing states.

Ohazuruike said that the protest was to show appreciation to the military for the efforts they had put in to ensure security in the Niger Delta.

“ We thank the Nigerian military for having sleepless nights so that we can have peaceful nights,” he said.