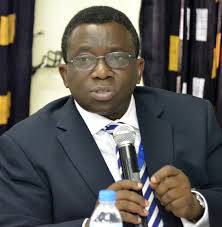 The Minister of Health, Prof. Isaac Adewole has cautioned drug manufacturers against producing substandard drugs to curb addiction and drug-related issues in the country.

The minister made the call in a message to a summit organized by the Pharmaceutical Society of Nigeria, Enugu Chapter, in Enugu on Wednesday.

According to him, those abusing drugs cannot be called criminals but those who sell and manufacture drugs beyond the recommended standard are the criminals.

“When a large number of people are now involved in substance abuse, the security of the state and the nation at large will be in trouble.

The minister said the war against illicit drug and abuse should be a collective effort of all Nigerians because it could lead to social vices like kidnapping, armed robbery and cultism.

In his remarks, the Commander of the National Drug Law Enforcement Agency (NDLEA), in Enugu State, Mr Anthony Ohanyere, expressed worry over abuse of not only illicit drugs but normal drugs.

Ohanyere noted that drugs considered naturally to be useful to life and unavoidable in sustaining life were now being combined to produce negative results.

“For example, our agency has just discovered that donkey urine is now being used in place of Codeine and Tramadol,” he said.

The commander said the way forward was not arresting and putting users of psychotic drugs into prison but awareness creation on dangers of such drugs.

He said that war against such vices was not government responsibility alone but a collective effort of all and sundry.

“A person that abuses drugs may never have the opportunity of contributing their quota to national development and it is costing the Federal government a lot of money to tackle this issue,” she said.

Olajumoke said the agency had intensified efforts at making sure narcotics drugs were made available to only scientific and medical offices.

She added that it partnered with agencies like NDLEA to eradicate drug abuse in Nigeria.

The Registrar, Pharmaceutical Council of Nigeria (PCN), Dr N.A. Mohammed, represented by the Director, Planning and Research, Baba Shehu Ahmed, said the Federal Government in collaboration with the council set up a Codeine Control and Other Related Matters Committee.

Mohammed said the committee would find lasting solution and recommendations to substance abuse.

He said the committee comprised agencies such as NAFDAC, NDLEA, UNODC, Ministry of Health and other stakeholders.

Ahmed said one of the recommendations of the committee was sensitization adding that Enugu State was the only state in Nigeria to have implemented such recommendation through the organization of a roundtable discussion on substance abuse.

The roundtable discussion on Substance Control is one of the Drug control master plans that aims to sensitize stakeholders in the elimination of drug abuse in Nigeria. (NAN)