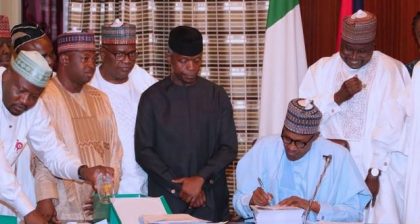 Financial experts on Thursday advised the Federal Government to avoid bureaucratic bottlenecks and ensure quick release of funds for the optimal performance of the 2018 budget.

The experts gave the advice in separate interviews with the News Agency of Nigeria (NAN) in Lagos, while reacting to the 2018 budget signed by President Muhammadu Buhari on Wednesday.

He said the availability of funds would go a long way in achieving some credible performance of the budget by the first quarter of 2019.

The economist said the economy would continue on an upward trend if there was no external macroeconomic shock.

He said the government should ensure that domestic prices were not significantly affected by the spending on political activities.

“The budget of N9.12 trillion might look quite unrealistic, but we have to look at the current revenue in terms of the current price of oil as against when the budget was presented.

“What was the exchange rate then and now, and the inflationary rate going down? The economy actually requires reflation to get us out of the depression fast.

“So, there is the need for a higher budget than what was presented and if the value of oil does not go down drastically, and the oil output increases, the economy can meet up without external borrowing,” Tella said.

He, however, tasked the executive and the legislature to address budget delays, noting that it was not good for the economy.

“Given that the budget was signed in the sixth month, eight months after presentation, it is apparent that the legislature needs to show more commitment to developing the economy,” he said.

Tella said the Nigerian economy was public-driven, not private-driven like developed capitalist economies, and that the legislature must recognise this in dealing with budget consideration and approval.

Omordion said the development, if not checked, would make budget implementation difficult.

According to him, the budget would be realistic if only the government could do the needful by reducing its borrowing and use the surplus above the oil price benchmark to finance projects.

He said the government should channel the funds to projects that will have direct impact on the economy and the people.

He also called for change in style, in the disbursement of funds for projects, and that the funds should be disbursed on time, for effective implementation.

“Budget delay in Nigeria is as old as the government; and it has contributed to the slow development and economic growth of Nigeria,” Omordion said.

NAN reports that President Buhari, on June 20, signed the appropriation bill of N9.12 trillion into law, after seven months of delay.

The President, however, raised concern over the National Assembly’s injection of strange projects and sundry irregularities into the 2018 budget.

Buhari said the legislators, “made cuts amounting to N347 billion in the allocations to 4,700 projects submitted to them for consideration, and introduced 6,403 projects of their own, amounting to N578 billion.” (NAN)