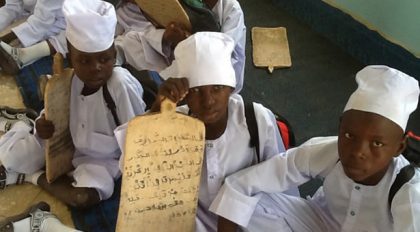 It is well understood that Almajiranci as it now exists in Northern Nigeria is not a pretty sight. One is constantly besieged by scores of young boys, begging bowls in hands, looking bedraggled and begging for food or sustenance. These boys can be found at every stop and it is very hard to look away. If you do manage to look away, then the newspaper headings and researchers like me will not let you forget its existence. The issue of Almajiranci, especially in its current manifestation, has become not only a topical issue but also highly politicised – who remembers Mrs Patience Jonathan and her jibe at Northerners who “born troway”? I remember that well and I also remember our collective anger, collective guilt you might say. It is this scenario that keeps attracting people to Almajiranci and keeps us all invested in finding lasting solutions.

It is also these emotive images and rhetoric that robs the system of its nuances and complexities. It is hard for anyone subjected by these discourses to conceptualise Almajiranci differently or as more than it appears. When people hear ‘Almajiranci’, all they can think of, are its many negatives. And it is this that forms the basis of my research with former Almajirai – especially men who have found some form of value in the system. The way we represent people is very important, Hall (1997) says that how you represent people, goes on to affect how you treat them. So if you call an Almajiri ‘a beggar’ or ‘a member of Boko Haram’ often enough, he soon becomes established as that. That becomes the constituted knowledge of Almajirai and the Almajiranci system, and will subsequently affect not just their representation but policy formation and future Identification.

These representational mainstream discourses including titles such as Soyinka’s “Butchers of Nigeria” and Purefoy’s “Almajirai, learning a life of poverty and violence”, are typical of how the phenomenon is described in media texts. The sensational headlines risk sucking us in and making us lose any objectivity when looking at the issue of Almajiranci. ‘Almajiri’ has now become a derogatory and pejorative word. While there is absolutely no doubt that there are several things not right with the system as it stands, the worry is that our collective guilt makes it easier for us to buy into these descriptions, negative representations and ‘Othering’ of the boys and the system in the general. If we see the boys, their parents and the practice as removed from us – the Western-educated elite, then it becomes easier not only to shed empathy but to criticise and demonise them and also their practices as backward and of another era. We also risk demonising a whole group of men for whom Almajiranci has worked. These men are those who feed our informal economy, former Almajirai, rather than being the ‘underbelly’ of the Nigerian society as the dominant discourses will have us believe are actually the ‘bread and butter’ of the Arewa society – the farmers, market traders, and the local artisans. Linking Almajiranci with Boko Haram is also not exactly helpful as it masks the many reasons and multiple causes for the existence of Boko Haram by simply saying the men are former Almajirai.

Many successive governments have attempted to tackle what is considered to be the problems of Almajiranci with very little successes and this is because we have chosen to conveniently forget that Almajiranci and its problems are not only set within a wider problematic Nigerian educational terrain but also a wider Nigerian societal problematic. Almajiranci is the mirror of the society within which it subsists, the issues with Almajiranci are the issues of the Arewa society at a microcosmic level. Some parents of Almajirai find it hard to access the promised Universal Basic Education and consider it either too expensive or coming at an opportunity cost they cannot bear. Many of the parents are also not convinced that this ‘Western’ style of education that the state offers is more beneficial for their children. The major drivers of Almajiranci include a mix of suitability, availability and affordability, what many in the media and in the scholarly literature have often chosen to do is reduce the drivers to a simple cause-effect reason why Almajiranci still sustains. This is often not the case, research has shown that the drivers are as complex as they are numerous and poverty is not the sole determinant neither is fecklessness or neglect on the part of the parents. For many, the choice of Almajiranci is well thought-through and rational as rational can be. For the parents, there is the fervent desire to inculcate in their children the knowledge of the Qur’an, which they still consider the most valuable of all knowledge. ‘Western education’ in Nigeria today has also not turned out to be the panacea it has been touted to be and good quality ‘Western-style education’ is now really the preserve of the rich and the middle classes.

Until we begin to question these discourses and the reasons for their existence, we continue marginalising a group of people who could hold the key to moving this practice forward. The men who have gone through the system are rarely asked what they think about it or even how to reform it. The dominant narratives will rather have us all believe these are men ready to kill or available to unleash violence at the behest of any money bag, they will have us believe that these are men without agency, who are little more than puppets in the hands of any master. My doctoral research shows that many of these former Almajirai are people whom this form of education has served, in a society which has offered them so little, with not many other viable or desirable options. Some have even gone on to acquire the desired Western Education, while others are quite content with what Almajiranci has given them. Their stories and lived experiences could, therefore, be an important part of the moving the Almajiranci story along.

What this write-up hopes for, is a moment to stop and reflect on the possibility of doing things differently moving forward. Policy after the policy has failed to address the issues that Almajirai and Almajiranci face. Perhaps it’s time to stop looking at Almajirai as ‘the problem’ and ‘Western-Educated’ Nigerians as the solution, time to collapse that binary. Time to review our own complicity in the state of Almajiranci and will ourselves to act differently. To treat its practitioners with less contempt as a start, to involve them in finding solutions and afford their subjugated knowledge some epistemic respect. Possibly even open our eyes to what the system can teach us as an educator of men because the postcolonial education system we have at the moment only guarantees success to a few within a closed system of social reproduction and the ‘Education for All’ agenda has certainly failed to reach ‘All’.