Argentina, a Bridge Too Long for Super Eagles to Cross 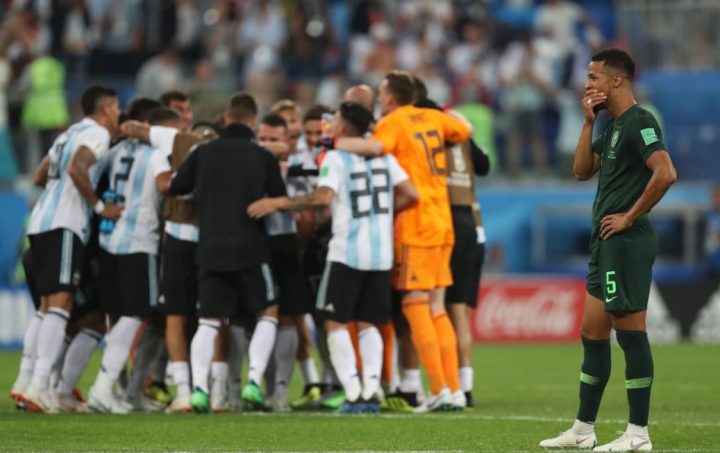 In a match of contrasting styles that lived up to its billing, the Lionel Messi-captained La Albiceleste of Argentina fought tooth and nail to edge the Super Eagles out of the World Cup in Russia.

The Argentines from the blast of Referee Cuneyt Cakir’s whistle took the game by the scruff of the neck, by scoring their opening goal in the 14thminute through the mercurial Lionel Messi; from an incisive pass from Eva Banega.

Not only did Argentina dominate proceedings in the first half, the Super Eagles played with a bit of stage fright it seemed, by allowing Messi, Angel di Maria, Gonzalo Higuain and others, to literally run rings around them.

Nigeria had 34 percent while Argentina had 66 percent ball possession, in a match the South Americans took eight shots as against Nigeria’s nine shots…of the shots Nigeria had three of their shots on target and Argentina had five on target.

La Albiceleste had five corner kicks as against three for Super Eagles, 20 fouls were committed by Nigeria and Argentina committed 15, Argentina got three yellow cards, while Nigeria got two.

The match was watched by 64, 468 at the Zenit St Petersburg FC Stadium in the heart of the city of St Petersburg.

Midfielders like Banega and Javier Mascherano found so much space in our midfield as they continued to exploit the spaces provided by our defenders, who were most times drawn out of position by the twinkle-toed Messi.

It took the alertness of Francis Uzoho to prevent the Super Eagles from two apparent scoring chances from Higuain and a sublime free-kick delivered by Messi to keep the scores at a respectable margin.

When eventually the Eagles began to mount their attacks through darting runs from Ahmed Musa and Kelechi Iheanacho and supported by Oghenekaro Etebo from the midfield, they lacked the cutting edge to trouble the Argentines.

Even though Nigeria equalised in the opening stages of the second half through a Victor Moses penalty kick, after the Video Assist Referee had indicted Mascherano for a foul on Leon Balogun, Odion Ighalo missed two gilt-edged opportunities that would have wrapped up the match for Nigeria.

On hindsight, La Albiceleste proved to be the better team because of their skills level, their doggedness, their tactical discipline and of course, the Messi touch within their ranks.

While Nigeria were striving for a draw which would have been enough to qualify the team for the Round of 16, the Argentines went all out for the goal that they needed to stay on in the tournament.

The result meant Argentina finished the group stage with four points, one ahead of Nigeria, to jointly qualify from the “Group of Death” alongside Vatreni of Croatia with nine points, while the Strakkamir Okkar of Iceland had one point.

Although the Super Eagles played with guts and vigour, they lacked the gamesmanship to kill the game because of lack of experience at that level; which the wily Argentines have in abundance and executed with aplomb.

On the part of Coach Jorge Sampaoli, whose job was on the line, he did the needful during the match by bringing in players like Sergio Aguero and Christian Pavon to add more bite to the team’s attack which eventually paid off.

Likewise, we expected Rohr to make the necessary instant substitutions in the defence and the midfield which he didn’t, but when he eventually made the substitutions, it was too little and too late; because La Albiceleste had gained the upper hand.

In terms of refereeing, the Turkish referee, Cakir was simply overwhelmed by the magnitude of the match through the inconsistent calls he made, which denied Nigeria a clear-cut penalty kick; after Iheanacho was kicked in the head.

Technology also played its part in the match after the VAR spotted the infringement of Mascherano on Balogun, but the same VAR was overruled by the centre referee after Marcos Rojo had touched the ball with his hand and the rest is now history.

In spite of failing to qualify for the second round of the 2018 FIFA World Cup, the Super Eagles cannot be said to have failed woefully compared to some other teams at the global football fiesta, the team performed well and can be rightly described as a work in progress.

On his assessment of the team’s performance, Ben Duamlong, a former Assistant Coach of the Super Eagles at the 2002 Korea-Japan World Cup, the players should be proud of themselves because they were not disgraced.

“The Super Eagles went down with their heads up and it now depends on the people upstairs (Nigeria Football Federation — NFF) to decide where we go from here.

“If the proper things are done in the years ahead…this team will surely come back better and stronger…in the upcoming Africa Cup of Nations’ tournament and the 2022 World Cup,’’ Duamlong said.

It now behooves on the Amaju Pinnick-led Nigeria Football Federation Executive Committee to carry out the necessary inquest, peruse the technical report from Rohr and chart a new path for a successful participation in future tournaments.