End Of Boko Haram Will Come Sooner Than Later – Osinbajo 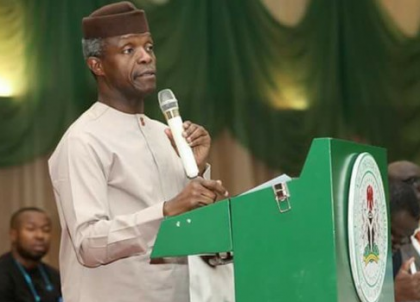 Vice President Yemi Osinbajo said on Thursday that the celebration of the 2018 Nigerian Army Day – NADCEL at Mongunu in Borno North was a proof that the “end of the Boko Haram terrorist group “will come sooner than later.’’

Osinbajo, who spoke at a “Mini Trade Fair and Military Equipment Exhibition as part of activities to mark the day, also said that it was a proof that the terrorist had been “substantially degraded.

According to him, Borno and the entire region (North East) will surely bounce back, and, with the support of the rest of the country, make up for the years of bloodshed and destruction.

The vice president said that the Sambisa forest, once the symbol of Boko Haram’s domination of the region, had been reclaimed, while the work of rebuilding had started in many communities across the state.

“Indeed, we are here to celebrate all of these wonderful successes, and progress.

“At a point, a few years ago, it felt as though they – terrorists were succeeding.

“As a result of the insecurity, social and economic life rolled to a halt in many parts of the state, as Boko Haram controlled a large territory and acted like the de-facto government of the state.

“The town of Monguno, which today is playing host to us, was a few years ago firmly in the hands of the terrorists.

“Today, thankfully, the tide has turned, in large part on account of the gallant and heroic work of the Nigerian Army. And it is on account of this that we are here today, to celebrate.

“We are here to celebrate the gallantry of our soldiers, men and women from every part of Nigeria, of different faiths and tribes and tongues, gathered to fight and defeat a common enemy.

“We are also celebrating the resilience of the people of Borno State, and reaffirming that our primary obligation to them, as a Government, is to ensure that they are able to return to their communities and rebuild their lives and livelihoods in peace and safety,’’ the vice president said.

Osinbajo expressed delight over the progress being recorded by the ongoing Operation Last Hold designed to rid remnant of terrorists from the Lake Chad Basin and Northern Borno.

The vice president noted in the last three years, life was gradually returning to many parts of Borno as schools had reopened, airlines resumed flights, religious celebrations held, major roads and highways reopened.

He said that he had no doubt that NADCEL and events lined up to mark it in Mongunu “will go a long way towards changing the negative narrative of terrorism, hunger and danger that have defined the North Eastern part of Nigeria, and the entire Lake Chad Basin, in the last decade.’’

Osinbajo commended the army which he said had fought wars at home and abroad, to secure the country, and keep it united, though it suffered loss and setback.

He specifically commended the Chief of Army Staff, Lt.-Gen. Tukur Yusuf Buratai for “inspiring the Nigerian army to turn the tide against Boko Haram.’’

“With the success of yet another Army Day Celebration, this time in the heartland of a dying insurgency, Gen. Buratai has left no doubt about the quality of his leadership.

“And today, we are all proud to associate with the Nigerian Army, for the ongoing victory in the North East.

“Long may that victory continue, even as it extends to other troubled parts of the country,’’ he said.

The vice president acknowledged the sacrifice made by members of the armed forces and other security agencies in the fight against the terrorists, saying “we are also here to remember.

“To remember the tens of thousands who have lost their lives to this needless violence; the innocent civilians, and the vigilante and military dead, who paid the ultimate sacrifice to preserve the security and sovereignty of Nigeria.

“We will never forget. And we shall continually strive to work to build a Nigeria in which terrorists and bandits shall have neither sway nor leeway.’’