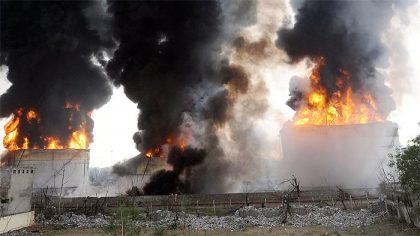 The NNPC on Monday assured residents in Niger State and environs that the fire incident at its depot at Pogo Village in Paikoro Local Government area will not affect the supply of petroleum products.

The News Agency of Nigeria ( NAN) reports that the Niger Police, had on Sunday, deployed armed personnel to prevent people from scooping petroleum products at the NNPC pipeline that exploded in Paikoro Local Government area of the state.

Mr Luke Anele, the Managing Director of Nigerian Pipeline and Storage Company, gave the assurance while talking to journalists at the NNPC in Minna on Monday.

He said that there was no cause for alarm, adding that the situation had been brought under control.

Anele said that the NNPC, would in the interim, embark on the evacuation of the spills to ensure the safety of the environment.

According to him, NNPC has commenced a spot assessment to ascertain the level of damage caused by the explosion.

He did not rule out the possibility of failure in the system but dispelled the rumour going the rounds that the problem was caused by lack of maintenance.

He also gave an assurance that the company would continue to ensure constant checks of the facility to forestall such an incident.

“Though no life was lost in the incident, we will soon commence the rehabilitation of the tank that was gutted by fire to put it back to use.” (NAN)