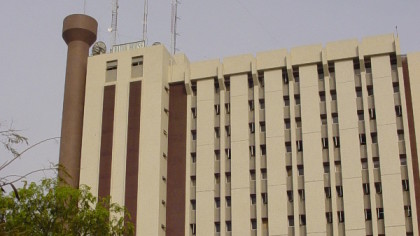 Workers of the Federal Radio Corporation of Nigeria (FRCN) in Enugu on Monday embarked on a peaceful protest demanding for improved welfare and upgrade of its facilities.

The peaceful protest was organized across the country by the three house unions of the Nigeria Union of Journalists (NUJ), Radio and Television and Theatre Arts Workers’ Union (RATTAWU) and the Senior Staff Association in the corporation.

Members of staff who appeared in black attires carried placards with inscriptions “Increase our Salary,” “Stop 25 per cent Remittance,” “Replace Obsolete Equipment” among others.

Agu called on the Federal Government to look into the poor working condition of staff.

“We are asking the Government of the Federation to please remove FRCN from 25 per cent IGR (Internally Generated Revenue); we are not 100 per cent profit-making organisation.

“If they can exempt us from paying this, we can be useful to ourselves but here again, the salary is not quite reasonable; we need a better salary,” he said.

Also the Chairman NUJ FRCN Chapel, Comrade Emeka Anyalebechi, decried negligence of the government on members and the working facilities.

Anyalebechi appealed for quick intervention in addressing the 15 Point Communiqué issued by the house unions during their meeting in May in Ilorin, Kwara State.

“Some of this equipment have lasted for up to 60 years, we are still using them here and they are causing us a lot of trouble, that is why we are off and on, times without number.

“We are asking the government to replace these obsolete equipment with digital ones, it will help us.

“If the Federal Government does not come to our rescue or handles some of the demands as we highlighted them, we will go on total strike,” Anyalebechi threatened.

Addressing the workers, the Zonal Director of FRCN, Enugu National Station, Mr. Ike Okere, commended the workers for the peaceful manner they conducted themselves.

He said that the 15 Point Communiqué had been noted by the management and promised that some of the issues which were beyond the management of the corporation would be presented to the federal government.

The workers later resumed work after the protest, urging the leadership of the in-house unions not to back down on the demands. (NAN)