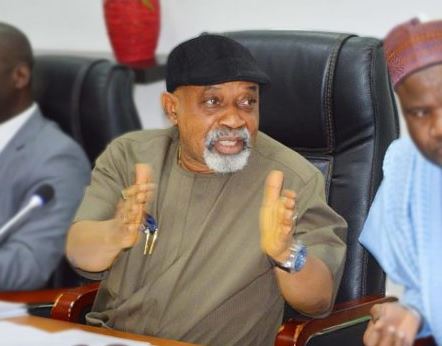 The Federal Government has warned contractors and firms promoting unfair labour practices in the oil and gas sector of the country to desist.

Sen. Chris Ngige, Minister of Labour and Employment gave the warning while addressing the newly elected National Administrative Council Members of the Nigeria Union of Petroleum and Natural Gas Workers (NUPENG), who visited him in his office on Tuesday in Abuja.

Ngige said that the warning has become necessary as any promoter of unfair labour practices in the oil and gas sector risked having its license revoked or not renewed.

According to him, I thank you for taking interest in job creation in the Oil and Gas Sector and for observing some lapses on the part of Labour Contractors licensed by the Ministry.

“ We have started reforming the process of granting and renewing Recruiters’ License and we will not grant or renew the license of recruiters who compromise by aiding and abetting “yellow dog” contracts, as any recruiters found abusing expatriate quotas will have his license revoked or not renewed.

“The ministry is working toward reforming the process of granting and renewing Recruiters License to Labour Contractors with the aim of ensuring adherence to expatriate quotas and eschew unfair labour practices.

“This move is in line with the Executive Order of the present administration led by President Muhammadu Buhari to ensure that jobs that are reserved for the local are not given to expatriates as well as protect indigenous products over foreign products, ‘’ he said.

He also said that efforts were being put in place to close up identified gaps in the operational guideline and labour laws in the oil and gas sector.

He added that in 2016, despite the shortfall in the oil revenue, the Federal Government brought both the International Oil Companies and the workers together to agree and fashioned out ways to ensure that there is no job loss.

“This is something to cheer because all parties agreed and we were able to save jobs in the oil and gas sector.

“We were never happy when people lose their job because the pressure will always come back to the government.

“Today oil prices have picked up and activities have commenced so we expect new jobs to be created in the oil and gas sector, ‘’ Ngige said.

He also affirmed that the desire of workers for decent work was in tandem with the Change Agenda, which was aimed at improving the living standards of Nigerian workers and promote the Decent Work Agenda.

Ngige, however, commended NUPENG for keeping faith with the Federal Government in 2016 when it moved to ensure appropriate pricing of the pump price of the premium motor spirit.

He noted that the move showed that they were partners in progress that when the government made a valid point the union acceded.

“It is in the same vain that when you make a valid point we listen to you. I want that spirit of cooperation to continue with the newly elected leadership of the union. Our doors are wide open for you, ‘’ he said.

In his remarks, NUPENG president, Akporeha decried unfair labour practices being perpetrated by Labour Contractors in the Oil and Gas Sector.

“It is so sad that in the oil and gas industry as it is in other sectors, our employees have become more or less slave labour with no hope for career growth and development.

“ In almost all multinational oil companies in Nigeria, there are no more direct permanent jobs for the middle level to lower level cadre.

“Labour Contracts of 5 + 1 in the oil and gas industry in the years past have all been virtually turned to service contracts with a shorter duration of 1 +1 or even sometimes less,” he said.

He stressed that uncertainty of job security is of grave concerns to the union and other stakeholders.

The president noted that this uncertainty is responsible for violent crises the country is witnessing today and the ever increasing criminal activities among the youths as they no longer see any reason for hard work.

He pledged the unalloyed support of the union to the promotion of industrial peace and harmony in the country.

“We promise to administer the union with a human face, a heart of kindness, respect for the extant labour law, employers stakeholders and relevant institutions, ‘’he said.