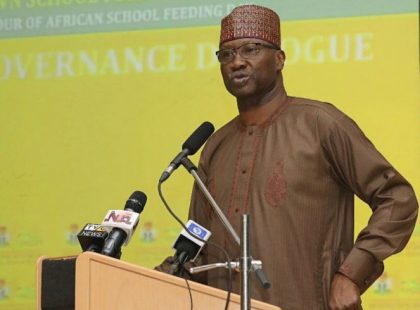 The Secretary to the Government of the Federation (SGF), Mr Boss Mustapha has called on traditional rulers to use their positions to promote peaceful co-existence in the country.
Mustapha, made the call while receiving a delegation from the National Council of Traditional Rulers of Nigeria (NCTRN), on Thursday in Abuja.
He said peacebuilding entailed collaborative efforts between traditional rulers; government and faith-based organisations, adding that peace promotes development, which in turn attract investment.
“As Royal fathers, it is believed that you hold the key to the success and failure of a nation because you operate at the grassroots and interact with the people daily.
“It is critical that we continue to cultivate peaceful coexistence to build a vibrant society.
“I want to draw your attention to the growing youth population in the country, as well as rising drug abuse, I want you to use your office to stem the tide.
“This is because the menace is destroying the generation that we will bequeath the leadership of this country to,” Mustapha said.
He also urged them to engage in regular advocacy to educate the youth on the dangers of drug abuse because of its adverse effect in the society.
Mustapha noted that youths at the local levels were more prone to drug abuse.
The SGF also called on the royal fathers to educate their subjects on the need to have their Permanent Voter’s Card (PVC), so they can participate in the 2019 election.
According to him, the herders-farmers clashes were usually resolved by traditional rulers in the past, but these days their influence in communities had greatly reduced.
“The herders-farmers clashes were usually resolved by traditional rulers who were the custodians of traditional institutions in the past, but so much mistrust has set in now.
“I believe that with the work of the council, we will soon resolve the crisis and peace will be restored in Nigeria,” Mustapha said.
Earlier, Dr Yahaya Abubakar, the Etsu Nupe and leader of the delegation said the council was made up of traditional rulers from the six geo-political zones of the country.
Abubakar said the aim of the council was to ensure peaceful coexistence among diverse cultural groups in the country, promoting oneness and unity of purpose.
He added that traditional rulers were the bedrock of success in any government.
“The structure of our nationhood was founded on the traditional institution,’’ Abubakar said.
He called for constant dialogue between the government and the council to ensure unity and peace in the country.
“We are willing to support government at all levels for peace and development because we have been playing a vital role in security, even before the colonial masters came to Nigeria,” Abubakar said. (NAN)