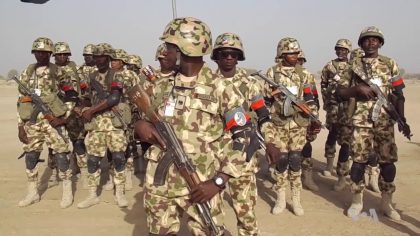 Brig.-Gen. Abdulmalik Biu, Acting General Officer Commanding (GOC), 7 Division, Maimalari Cantonment, Maiduguri, has called for a synergy between the Army and the Media to achieve complete success in the war against the insurgency.

Biu made the call on Wednesday during a luncheon organised by the command for Defence Correspondents.

The GOC said that such collaboration was imperative to enable the media to inform and educate the society on the ongoing military operations in the North-East.

“The media is a critical stakeholder in the campaign against the insurgency,” he said.

He added that reporters in the theatre of operation should always check their facts so as to present accurate and balanced information to the public.

The commander disclosed that the military had set up media desks in all its formations to facilitate the smooth flow of information, and to keep the people abreast of the development of the operation in the region.

According to him, the military in collaboration with other security agencies recorded significant successes in the ongoing clearance operation, designed to root out the remnants of Boko Haram insurgents and deny them the ability to re-group.

While reiterating the commitment of the military to end insurgency and restoration of peace, Biu assured of the command’s support to reporters, to enable them to discharge their duties effectively.

Alhaji Haruna Dauda, Chairman, Correspondents Chapel, Nigeria Union of Journalist (NUJ), Borno chapter, lauded the successes recorded by the military in the war against insurgency and the peace-building process in the North-East.

Dauda assured of the readiness of the journalists to display a high sense of patriotism, discipline and professionalism in the discharge of their duties. (NAN)