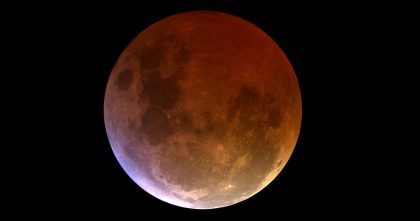 Nigeria will on Friday night experience a spectacular total lunar eclipse, which will last for one hour, Prof. Augustine Ubachukwu, has said.

Ubachukwu, the leader of Astronomy and Astrophysics Research Group of the University of Nigeria, Nsukka, disclosed this on Thursday in an interview with the News Agency of Nigeria in Abuja.

“This total lunar eclipse will be primarily visible from the world’s Eastern  Hemisphere, which are Europe,  Africa,  Asia, Australia and New Zealand.

“Part of South America will be able to watch the final stages of the eclipse just after sunset on July 27.

“New Zealand will catch the beginning stages of the eclipse before sunrise on July 28.

“It will be the century’s longest total lunar eclipse with a whopping one hour and 43 minutes in totality.

Ubachukwu observed that a lunar eclipse could occur only on the night of a full moon.

The scientist said during a total lunar eclipse, the earth completely blocks direct sunlight from reaching the moon, while the only light reflected from the lunar surface would be refracted by the earth’s atmosphere.

According to him, unlike solar eclipses, lunar eclipses are safe to view without any eye protection or special precautions as they appear dimmer than the full moon.

The professor, however, said that the next total lunar eclipse that would be visible in Nigeria would occur on Jan. 21, 2019.

Prof. Rabiu Babatunde, the Director, Centre for Atmospheric Research in Kogi told NAN that people should not be perturbed at the occurrence.

Babatunde said that the event underscored the fact that planetary objects, including the earth, were in a state of defined continuous motion.

He said that the occurrence necessitated the need for scientists to continue monitoring and exploring the dynamics of the motion and the phenomena associated with them.

“Keeping tab on the dynamics will enable scientists sensitize the global community of any hazard associated with such occurrences,’’ he said. (NAN)