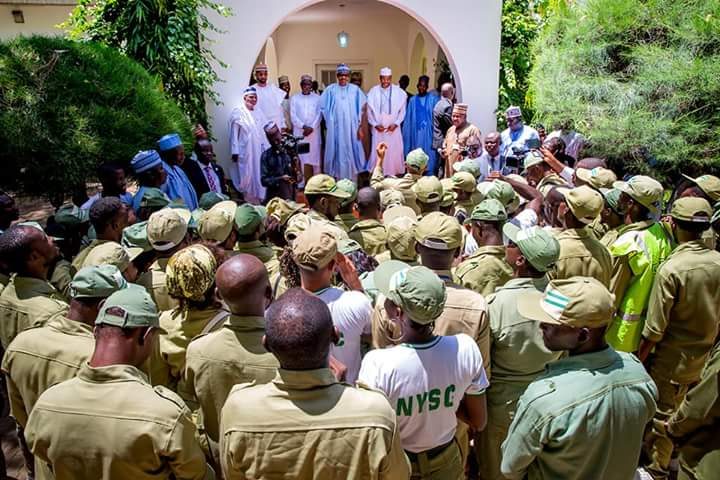 The President’s Senior Special Assistant on Media and Publicity, Malam Garba Shehu, made this known in a statement in Abuja on Wednesday.

The 28-year-old Okenala Ahmed, a graduate of Insurance from the Federal Polytechnic Offa, Kwara State, was among the Corps members who paid Sallah homage to President Buhari on Tuesday in Daura.

The visit was part of activities to mark this year’s Eid-el-Kabir celebrations.

Shehu said, in the course of the President’s interaction with the Corps members, the Corps Liaison Officer (CLO), Jibrin Ishak, had appealed for assistance for their physically challenged member.

According to the CLO, the indigent Corps member, who is from Offa, Kwara State, had earlier contemplated redeployment from Katsina State due to his health condition.

The Presidential aide disclosed that President Buhari would undertake the cost of medical care and treatment of Ahmed, who is an Economics NYSC teacher at Government Day Senior Secondary School, Daura.

Buhari had on Tuesday received members of National Youth Service Corps (NYSC) serving in Daura community – an audience that has become part of his schedule during the Sallah celebrations in past years.

The Corps Liaison Officer, Mr Jibrin Ishak, who spoke at the event, thanked the president for prioritising the welfare of the youth to secure their future through his style of leadership and developmental initiatives.

He also appealed to the president to come to the rescue of the Corps member, Ahmed, who was in dire need of medical attention.

President Buhari, in the spirit of the season, donated a bull, 10 bags of rice and N500,000 to the corps members.