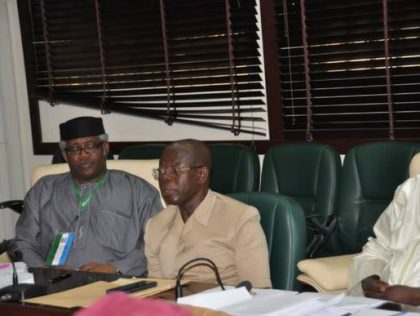 The All Progressives Congress (APC) has pledged to ensure compliance with the electoral guidelines, fairness and justice as well as observe all the principles of internal democracy while conducting its forthcoming party primaries.
The National Chairman of the APC, Comrade Adams Oshiomhole, gave the assurance when he spoke to State House correspondents at the end of the APC Caucus meeting held at the Presidential Villa, Abuja, on Tuesday night.
He confirmed that the meeting discussed the upcoming party primaries based on the Timetable and Schedule of Activities for the 2019 general elections as released by the Independent National Electoral Commission (INEC) in January.
The News Agency of Nigeria (NAN) reports that the timetable covered the Presidential, National and State Assembly, Governorship and the Federal Capital Territory (FCT) Council elections.
The timetable, which was issued by the INEC Chairman, Prof. Yakubu Mahmoud, in Abuja, indicated that party primaries for the Presidential, Governorship, Federal and State Elections would begin on Aug. 18 to end on Oct. 7, 2018.
The Federal Capital Territory Area Council Elections would commence on Sept. 4 to end on Oct. 27.
According to Oshiohmole, the APC is obliged to comply with the INEC guidelines because the rules are derived from the provisions of the nation’s Electoral Act.
“The meeting just had a conversation around the forthcoming primaries.
“As you know, based on INEC timetable on primaries, this is the season from the President down to House of Assembly and the exercise must end on Oct. 7 according to INEC guidelines.
“We are obliged to comply with the guidelines because the guidelines are derived from the provisions of the Electoral Act.
“So, we basically discussed how to ensure full compliance with the INEC guidelines and also ensure that that we observe all the principles of internal democracy, participation, ensuring fairness and justice.
“I think those are the issues basically,’’ he said.
The chairman maintained that APC as the governing party had since resolved to respect the electoral act and the APC’s constitution while conducting its activities to ensure justice for all members.
He announced that the resolutions at the APC Caucus meeting would be tabled at the National Executive Committee (NEC) meeting of the party fixed for Thursday for deliberation and possible endorsement.
“By Thursday we will go to NEC where the formal decisions will be rectified and once they are rectified there will be no problem; they are not being kept because every member of the party and indeed Nigerian are entitled to know how we agreed about the exercise.
“But I think everybody has confidence that we will do very credible primaries to ensure that those who fly the flag of the party have the mandate of their various constituencies,’’ Oshiomhole said.
The meeting was attended by Vice-President Yemi Osinbajo and members of the National Executive Committee of the APC led by its chairman.
Others at the meeting were APC governors of Borno, Jigawa, Niger, Plateau, Kogi, Adamawa, Ondo, Kano, Ogun, Oyo, Katsina, Osun, Yobe, Nasarawa, Kebbi, Imo and Lagos States.
Also at the meeting were former governor of Ekiti state, Mr Segun Oni; Majority Leader of the House of Representatives Femi Gbajabiamila; former Ebonyi governor, Mr Martin Elechi; former Borno governor Ali Sheriff; former Lagos state military administrator Buba Marwa; retired Gen. Lawrence Onoja; Chief Jim Nwobodo, and Sen. Kabiru Gaya.
Former APC National Chairman, Chief John Odigie-Oyegun; former Enugu state governor Sylva Chime, and former Edo governor Oserheimen Osunbor also attended the meeting.
Others that attended were the former President of the Senate Ken Nnamani; former Ekiti state governor Niyi Adebayo; former Akwa Ibom governor Godswill Akpabio; former Bayelsa governor Timipre Sylva; former Petroleum Minister Don Etiebet, and the Minister of Information and Culture, Alhaji Lai Mohammed.
Some members of the National Assembly from the two chambers were also in attendance. (NAN)