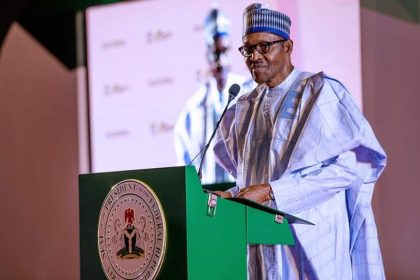 Project-2019 (P2019), a civil society organisation on Thursday said that President Muhammadu Buhari ‘s statement on national interest and the rule of law is legal and constitutional.
Mr Wale Ogunade, Convener of the group told the News Agency of Nigeria (NAN)  in Lagos, that President Buhari ‘s statement was a restatement of the provisions of the laws of the Federal Republic of Nigeria.
According to him, the President’s statement takes its foundation from the fact that, the rule of law can only exist when the national interest and security is secured in a state of peace and tranquillity.  Otherwise, it is a farce.
President Buhari while flagging off the 2018 Annual General Conference of the Nigeria Bar Association (NBA) in Abuja on Sunday,  asserted the supremacy of national security and interest over and above the rule of law, quoting a judgment of the Supreme Court.
He said: “Rule of law must be subject to the supremacy of the nation’s security and national interest.
“Our apex court has had cause to adopt a position on this issue in this regard and it is now a matter of judicial recognition that; where national security and public interest are threatened or there is a likelihood of  being threatened, the individual rights of those allegedly responsible must take second place in favour of the greater good of the society”.
Ogunade said that the fundamental rights of citizens are not absolute as there could be limitations.
”As active stakeholders in the political development of the country, it becomes imperative to examine the statement dispassionately and objectively for the collective good.
”While it is a recognised fact that the rights of citizens are fundamental according to the constitution and international treaties of which Nigeria is a signatory, it’s also a fact that such rights are not absolute on their own, but with limitations.
”For example, the right to free speech is limited by the aftermath of libel or slander by whoever has been defamed.
”Also, the fundamental right of a citizen to free movement can be limited in the public interest or national security, if his or her actions constitute a threat to societal order through the provocative act of assaulting public sensibilities. For example, exercising the right to movement naked.
“‘Again, the right of an individual or group to practice his/their religion is not an absolute right to permit the infringement on the rights of other citizens through making the public space inaccessible to them in the discharge of one’s religious rights.  This is tantamount to a threat to the public or national interest.
”Again, the fundamental right of association of citizens, of being members of an ethnic nationality or group does not confer on them, the absolute right to undermine national security by deriding and threatening the lives of other citizens who are not of same ethnic stock.
”This act if not curtailed is a threat to national security and interest.
”Furthermore, under our laws, an individual right to property can be abridged in the public or national interest by the state, through acquisition and the right of the former owner can only be remedied by compensation in most cases only on the basis of the owner having legal documents to the property.
”This again is a reaffirmation of the fact that where national or public interest comes into contact with individual right, the latter becomes subsumed, ” he said.
Ogunade said that section 45 sub-section 1 of the 1999 constitution is clear on the issue.
According to him, the power to determine what constitutes a threat to national security and national interest is solely vested in the executive arm of government for now.
”Section 45 (1) of the 1999 constitution states explicitly that:
“Nothing in sections 37, 38, 39, 40 and 41 of this Constitution shall invalidate any law that is reasonably justifiable in a democratic society –
(a)  in the interest of defence, public safety, public order, public morality or public health; or
(b) for the purpose of protecting the rights and freedom of other person’s.
”Therefore, instead of dissipating energy of whipping up emotions and sentiments in condemning Mr President’s statement which is in alignment with provisions of our constitution, we will be more interested in extensive public engagement on this matter if and only if genuine and legitimate concerns are directly focused towards curtailing the abuse of power likely to arise from the power to determine what constitutes a threat to national security and national interest which is solely vested in the executive arm of government for now.
”Like the French philosopher, Montesquieu posited, power corrupts and absolute power corrupts absolutely.
”Unless and until the law is amended to take care of the concerns noted above, President Buhari’s statement is a restatement of the provisions of the laws of the Federal Republic of Nigeria which is indisputably right, ” he said. (NAN)