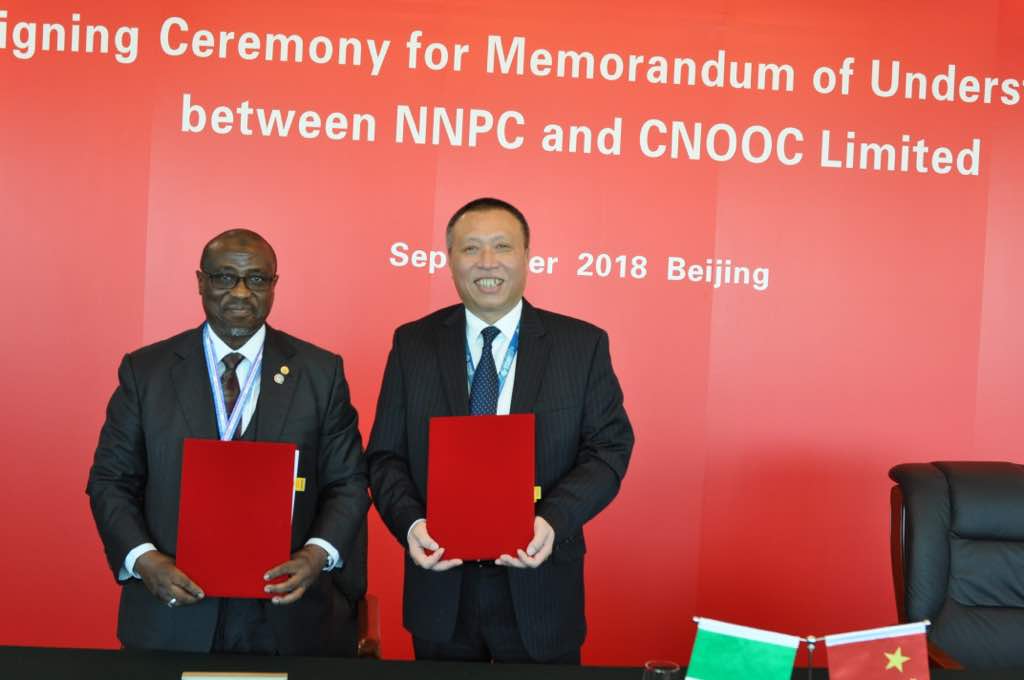 The Nigerian National Petroleum Corporation (NNPC) has signed a Memorandum of Understanding (MoU) in China with the China National Offshore Oil Corporation (CNOOC) towards developing Nigeria’s oilfield services as well as boosting research and development in the oil and gas industry.

The MoU signing, the third in the series within the week, by the NNPC Management on the sidelines of the ongoing Forum for China-Africa Cooperation (FOCAC) Summit, took place Wednesday, in Beijing, China.

It would be recalled that on Tuesday in Beijing, the corporation signed two separate MoUs with two Nigeria-Chinese consortia (OBAX-COMPLANT Consortium and CAPEGATE-NANNING Consortium) for the development of biofuels and establishment of biofuels complexes across Nigeria.

Speaking shortly after signing the dotted lines on behalf of the corporation at the CNOOC Headquarters in Beijing yesterday, Group Managing Director, Dr. Maikanti Baru, said this latest MoU signing marked a milestone in NNPC’s aspiration to transit from an integrated oil and gas company to an energy company.

“Our aim is to complement the Federal Government’s determination to meet the growing energy demands and diversify the economy away from reliance on carbon-based fuels,” Dr. Baru stated.

According to the GMD, the collaboration would also reinforce NNPC’s desire to partner with strategic investors to develop strategies for continuous cooperation that will be economically profitable for the two National Oil Companies (NOCs).

Under this agreement, the two NOCs would collaborate on getting the technical expertise required to provide oilfield services, including operatorship of oilfield assets in Nigeria and beyond.

The partnership would also, in the first instance, see a significant upgrade of the NNPC’s R&D Division laboratories in Port Harcourt, Baru added.

He assured the CNOOC Management that the collaboration between the two NOCs would yield the desired outcomes and further cement the established relations between Nigeria and China, which came to play at the FOCAC Summit in Beijing.

Aside oilfield services and Research & Development, the GMD noted that renewable energy and biofuels production were another focus area the NNPC was keen to collaborate with CNOOC.

“I am looking forward to further collaborating with your organization towards establishing biofuels refineries in Nigeria and power generation using renewable energy sources,” Baru added.

While describing the visit to the CNOOC Headquarters as historic, Baru commended the Chinese Oil company’s Management for its visit to the NNPC Towers in Abuja, on two previous instances.

He said the NNPC Management had identified CNOOC as one of the leading NOCs making giant strides in the global oil and gas industry, especially in ultra-deep offshore oil exploration.

Responding, CNOOC’s Executive Vice Chairman who signed the MoU on behalf of his corporation, Mr. Fang Zhi, described the development as “a milestone for the two companies.”

“With this new chapter opening in the history of CNOOC’s co-operation with the NNPC, we hope to witness many more future collaborations that will be beneficial to both parties,” Zhi added.

Earlier in his remarks, CNOOC Chairman, Mr. Yang Hua, said CNOOC considered Nigeria as a very strong partner, stressing that over $14bn had been invested by the corporation in Nigeria – the largest single investment in any country by the Chinese oil giant.

He observed that with about 160 oil and gas fields being developed as well as over 200 offshore platforms globally, CNOOC has what it takes to help Nigeria develop its abundant hydrocarbon resources.

CNOOC, a global leader and China’s largest producer of offshore crude oil and natural gas, is the third-largest NOC in China, after the China National Petroleum Corporation (CNPC) and China Petroleum and Chemical Corporation (SINOPEC).