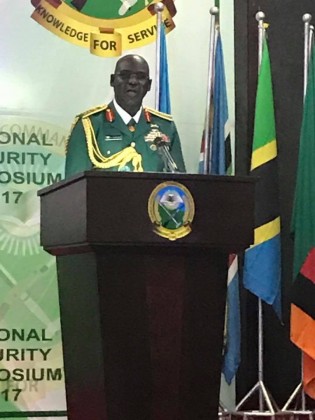 The Chief of Army Staff (COAS), Lt-Gen.Tukur Buratai has said that the war against terrorism required the collective support of all Nigerians to consolidate on the victory recorded.

Adeyemi-Akinleye said Buratai stated this while speaking as the Special Guest of Honour at the 50th Anniversary and International Conference held at the main campus of Ahmadu Bello University (ABU), Samaru, Zaria, Kaduna State.

The conference with the theme: “National Question, Security and Governance in Nigeria”, was organised by the Department of Political Science, ABU, Zaria.

Buratai, represented by the Commandant, Depot Nigerian Army, Zaria, Maj-Gen. Victor Okwudili-Ezugwu said the fight against terrorism should not be the sole responsibility of the security agencies.

“The war against terrorism is a collective responsibility, every individual or organisation must be supportive of government efforts and that of the security agencies to rid the country of criminality and security challenges, ’’Buratai said.

Reflecting on the theme of the conference, Burai said, “Good governance is all about effective and transparent leadership that produces a result which transforms the socio-economic conditions of a nation.

“Good governance and accountability will ensure that resources meant for development are used to address basic human security and development needs of the citizen, thus guaranteeing a decent standard of living for all.

“Lack of good governance breeds corruption that further weakens the state capacity to deliver services to its citizens. “

According to COAS, such development can create a conducive environment for violent extremism to emerge and flourish as well as rebellion.

Commenting on the fight against insurgency in the North-East, Buratai said the Nigerian Army had achieved a lot by adopting kinetic and non-kinetic powers in executing the war on the Boko Haram insurgents.

The Army boss said the army also used non-kinetic power, which involved the use of non-military power, to win the hearts and minds of the local population through civil-military relations and other related activities.

“In undertaking the task of combating the insurgency and terrorism, the Nigerian Army involves the application of kinetic and non-kinetic power.

“The kinetic power involves engaging the group in military combat with the aim of decimating their military capabilities.

“The non-kinetic power involves the use of non-military power to win the hearts and minds of the local population through civil-military relations and other related activities’’.

He expressed satisfaction that a lot had been achieved in the fight against security challenges facing the country.

Buratai assured that the military was now consolidating on the gains achieved in the fight against insurgency in the North-East as part of the stabilising phase of its operations.

He further called on the participants at the conference to rethink and re-strategise ways to enhance governance that would ensure a better society for all Nigerians. (NAN)