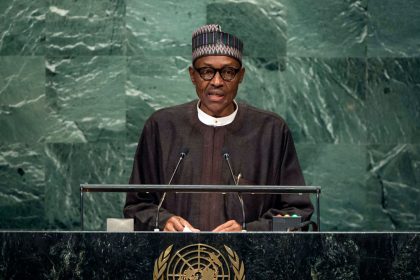 President Muhammadu Buhari says the issue of corruption within countries and illicit flow of funds across national boundaries can only be effectively addressed through multilateral cooperation and concerted action.

The Nigerian leader stated this while addressing the issue of corruption and illicit assets when he delivered his statement at the opening of the 73rdsession of the United Nations General Assembly (UNGA73) in New York, U.S., on Tuesday.

According to him, the issue of corruption within countries and the illicit flow of funds across national boundaries have a huge negative impact on the stability, peace, and economic prospects of millions in developing countries.

The President noted further that, “Corruption significantly deprives national Governments of resources to provide meaningful livelihoods to their populations who are predominantly youths, thus giving rise to more irregular migration.”

While noting that the fight against corruption was a collective assignment involving all stakeholders, he said, “It is in our collective interest to cooperate in tracking illicit financial flows, investigate and prosecute corrupt individuals and entities and repatriate such funds to their countries of origin.”

“Fighting corruption or resolving international conflicts, crises and wars; defeating terrorism and piracy; curbing arms trafficking and the proliferation of small arms and light weapons which fuel these conflicts, particularly in Africa; stemming irregular migration by addressing its root causes; and the many other global challenges we are faced with today can only be effectively addressed through multilateral cooperation and concerted action,’’ he added.

The Nigerian leader, however, reiterated his call for the reform of the United Nations System so as to effectively address the challenges confronting the world.

He particularly called for the reconstitution of the Security Council to make it more equitable and more representative of the global community.

He said: “The only global institutional framework we have to address these challenges is the United Nations System.

“That is why we continue to call for the strengthening of the Organisation and making it more effective by speeding up the pace of progress toward its reform, including that of its principal organ, the Security Council.

“The reconstitution of the Council to make it more equitable and more representative of our global community is both a political and moral imperative.

“We believe that a reformed Security Council with expanded membership in both the permanent and non-permanent categories, is in accord with prevailing international consensus and it is in our collective interest to do so.

“It is high time we stopped skirting around the issue and establish achievable benchmarks and timeframes for these reforms.”

Giving a background to the call, Buhari said, “I assure you all that in this advocacy, I am only reflecting Nigeria’s deep and abiding commitment to our Organisation and its founding principles and goals.

“From the date, we joined in 1960, we have contributed our quota to the fulfilment of the mandate of the UN. We have been active participants in many Security Council and African Union authorised Peace Keeping operations around the world, beginning with the Democratic Republic of Congo operations in 1960.

“We are resolute in complementing the efforts and examples of the United Nations to promote gender equality and youth empowerment as necessary pillars for sustainable development.”

He noted that without these, there could be neither enduring peace nor security.

“As we set and implement our national policies to achieve these goals, we, in the spirit of international solidarity, will readily cooperate with other nations seeking to achieve similar goals for their own populations to help ensure that no one is left behind,’’ he added. (NAN)