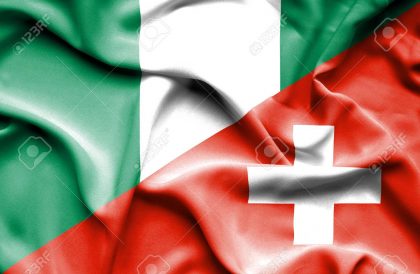 Waving flag of Switzerland and Nigeria

Nigeria has commended Switzerland for its continuous support on stolen assets repatriation and other anti-graft interventions.

Mr Baba Madugu, Nigerian Ambassador to Switzerland stated this in Bern at a reception in commemoration of the nation’s 58th Independence anniversary.

“We appreciate Switzerland for demonstrating the will-to support Nigeria in the fight against corruption by aiding the repatriation of $322million dollars stashed in the country,” Madugu said.

The Envoy Who expressed government’s Commitment to fighting corruption appealed for continuous support from the Swiss authorities.

He also spoke on the current security situation in the country saying that activities of Boko Haram insurgents had been reduced to the barest minimum.

“What we have now are pockets of hit and run attacks synonymous with a dying terrorist group.

“This is a clear indication of our Commitment and resolve to surmount the challenge.

“However, we need more international support for the group to being wiped out completely considering the threat it poses to Nigeria, it’s neighbours and the world at large, ” the envoy stressed.

Meanwhile, a cross section of Nigerians Who spoke at the reception advised government on proper utilisation of the repatriated funds.

Speaking with the News Agency of Nigeria (NAN) they unanimously urged the government to inform the people on the areas-of development the Monies were being channelled to.

“We want-to see tangible results of projects being executed with the money,’’ Mr Pius Okafor, a member of the Nigerians in Diaspora Organisation (NIDO) in Swiss said.

Similarly, Ms Anne Bako, a researcher said that government should also go after corrupt officials Who use fronts to perpetrate crimes.

“Government needs to bring them to justice too, it should not be after they have left office,” Bako stressed. (NAN)