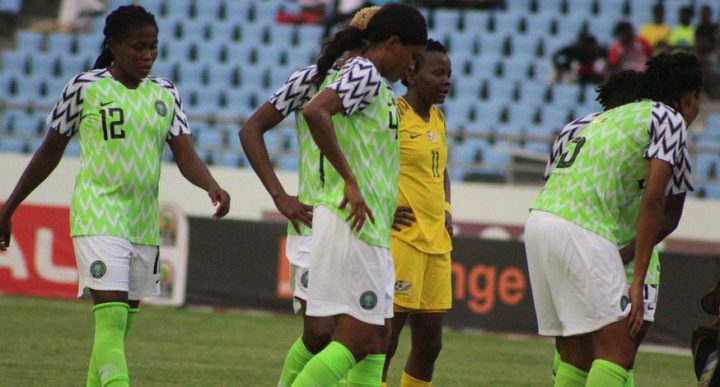 Layi Adesiyan, the Director of Youths, Sports and Special Needs in Osun, says the Super Falcons deserve commendation in spite of their 0-1 loss to the Bayana Bayana of South Africa.

The Bayana Bayana beat the African champions in Cape Coast on Sunday evening through an 85th minute goal by Thembi Kgatlana.

This was in both sides’ opening Group B match at the 2018 African Women Cup of Nations (AWCON) holding in Ghana.

“The Nigerian team could have even gone ahead to win the match if they were more clinical in front of goal.

“I must confess that our girls surprised me today. I didn’t give them a chance against South Africa,’’ he said.

The Osun director however expressed confidence that the Falcons could perform better and win their next game against Zambia on Wednesday.

“Every player will be looking to impress the coaches. Each of the players have shown that they are ready to represent Nigeria and deserve to be part and parcel of the main squad,” he said.

She added that she was happy the girls communicated well and played as a team.

“The team deserves to be commended for holding their own against an experienced Bayana Bayana side.

“As a coach, I will encourage the Falcons to be focused, determined and play their remaining games with seriousness. They always make the country proud,” she said

The Falcons will take on Zambia on Wednesday and face Equatorial Guinea on Saturday in their final match of the first round phase.