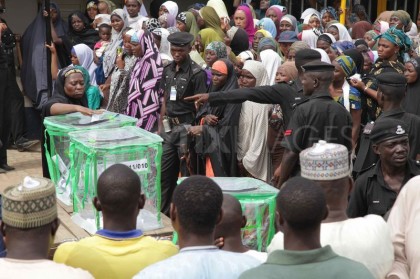 Voters Lined up to Cast Vote

A female candidate in Bauchi State, Mrs. Maryam Alexander, says vote buying and selling can undermine the democratic process and prevent the electorate from freely electing their representatives and leaders.
Alexander is vying for the state house of assembly from Dass local government on the platform of Green Party of Nigeria (GPN).
In an interview with the News Agency of Nigeria in Bauchi, she said that vote buying was becoming a danger which, if not curbed, could recede the country’s development.
“We should not allow money to become the determining factor of our choices.
“Anyone who is willing to buy his way into any electoral office does not have the good of the people at heart but rather wants to serve his own interest.“Vote buying and selling is something that needs to be taken very seriously because it is criminal.
‎
“Something has to be done quickly about vote buying. But also, we all know it’s a matter of building the right political culture among the politicians themselves and also among the electorate,” she said.
‎
‎
” If you sell your vote and let other people buy it, it is like selling a piece of yourself. You sell your integrity;  your independence and influence,” she said.

“We must all think about this and find a solution to it, we need to start talking about it,” she said.

She encouraged voters to take the money being offered, but still “vote right”. (NAN)‎