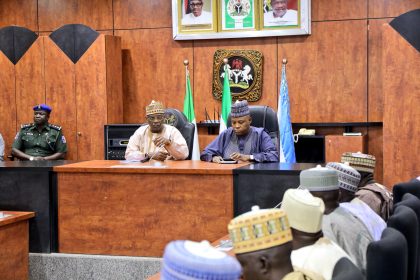 Shettima said during his visit that the ‘unfortunate incident in Dapchi’ reminds him of conspiracy theories regarding the Chibok abduction, cautioning that politicians should learn a lesson on the need to separate politics from issues of security.

The parents of these girls would always look up to you with hope in the midst of agony. I know you are pained but I also believe that insha Allah, these girls will be rescued very soon. It is unfortunate that we have faced yet another abduction but that only reminds us about the difficulties of fighting insurgency.

Oftentimes, they strike where you least expect. Before Boko Haram attacked Chibok, that Chibok had the least threat of Boko Haram in the northeast. No one expected them to even think about Chibok because it a mostly Christian community where Boko Haram was hardly an issue there. If the parents thought Chibok wasn’t safe, I don’t think they would allow their children to be there. Of course, as Government we wouldn’t dare do so. In the same vein, I don’t think anyone ever expected an attack in Dapchi.

This incident however, reminds all of us not only in Borno and Yobe but perhaps across the northern Nigeria to be on guard. I think the difference between the Chibok incident and this one, is that the Federal Government didn’t react in denial, doubt or formed a conspiracy theory. The Federal Government assumed responsibility which we hope will lead to rescue of the schoolgirls. When schoolgirls were abducted in Chibok, some people said there was no abduction because Borno was in the opposition.

Those who admitted there was abduction, came up with a conspiracy theory that the APC leaders perpetuated it in order to win the 2015 elections. Now, this abduction took place in an APC controlled State under an APC led federal government. What this reminds us, in very painful way, I should add, is that as political actors, we should learn to separate politics from issues of security. Human lives are very precious in the sight of Allah” Shettima said.

The Governor said he was in Yobe not only as Governor of Borno but also to represent the Northern Governors Forum.

“I am here as Governor of a sister State, because Borno and Yobe are like siamese twins; what affects Yobe invariably affects Borno. I am also here as representative of the Northern Governors Forum. I am used to traveling all the way to the south to represent our forum over sensitive issues, particularly on security. I felt it would be an irony if I go to far places and I don’t come to neighboring Yobe State at a time like this. Your Excellency (Gaidam), our colleagues have mandated me to tell you that we stand by you at this difficult time. We share the grief of parents whose daughters are affected by this unfortunate incident.

They are not their daughters alone, they are our daughters as well. I know that Your Excellency has been supportive of the military over the years with other security establishments in the State. I know you are working closely with them to have this resolved.

This period requires us to be stronger, more united and more focused. We should remain in prayers with a strong hope that these girls are rescued as quickly as possible. We should remain in prayers that insha Allah, insha Allah enduring Peace will return to Yobe, Borno, Adamawa, the entire north and Nigeria. I am an eternal optimist. I see optimism in Your Excellency every day. I believe that these trying phases shall pass, insha’Allah. Bi iznillah, Yobe and Borno will gain lasting Peace, tranquillity and prosperity and this, we pray and hope, will happen soon” Shettima said.

Newer Post#DapchiGirlsAbduction:NHRC Harps On The Need To Protect Rights To Education & Dignity Of School Children
Older PostNLC Has Lived up to Expectations, House in Full Support of Minimum Wage Increment