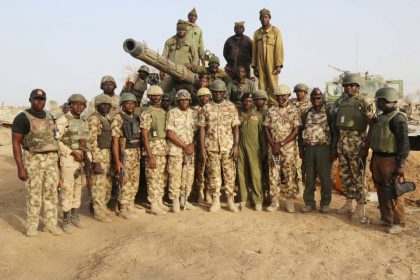 Nwachukwu disclosed that the troops under Operation DEEP PUNCH II had cleared insurgents’ hideouts at Agapulawa; Amuda, Nyawa and Attagara in Sambisa Forest.

He said troops killed the five insurgents at Tchikide and Chinene in the Lake Chad region.

Nwachukwu said that two soldiers were killed and two others wounded when an insurgents’ Improvised Explosive Devices (IEDs) vehicle hit their military vehicle.

He said that the wounded soldiers were evacuated to a military medical facility for treatment.

“In continuation of the “On Tuesday 28, February, 2018; troops successfully cleared and dismantled insurgents’ camps at Agapulawa, Amuda, Nyawa and Attagara in the remaining parts of Sambisa Forest.

“The clearance operations progressed further into other identified insurgents’ camps around Tchikide and Chinene, where the troops ferociously engaged and cleared pockets of resistance by the insurgents and killed five of them,” he said.

According to him, the gallant troops had reorganized and resumed operation and assured Nigerians of the military’s commitments to the successful completion of counter-insurgency operation in the region. (NAN)