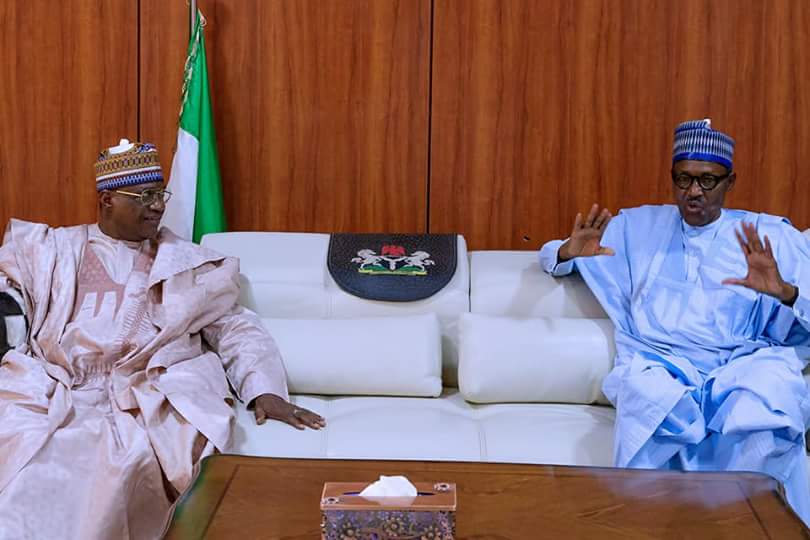 ABUJA: President Muhammadu Buhari on Wednesday in Damaturu, Yobe State capital assured Nigerians and the international community that the missing 101 Dapchi girls will be rescued or released.

Citing the release of more than 100 Chibok girls, University of Maiduguri lecturers, some women police personnel, students and an NYSC member, the President declared: “I have no doubt that the Dapchi girls will be rescued or released. I want to reassure parents, Nigerians and the international community that we will do all that is within our power to make sure that the girls are brought back safely to their families.”

The President Buhari told the gathering that the Federal government is partnering with the international community including Nigeria’s immediate neighbours to ensure the safe return of the girls.

“Just recently, I reiterated our resolve to negotiate for the unconditional release of the girls.”

“This is borne out of this administration’s conviction that doing so is safer devoid of risks and will not endanger the lives of our young girls who are in harm’s way.”

“There will be no rest till the last girl, whether from Chibok and Dapchi, is released. The girls, like all our citizens, must enjoy unhindered freedom and pursue their legitimate aspirations.”

“The Dapchi and Chibok students are our girls and must enjoy our protection. They must live to achieve their individual ambitions, to be great women of tomorrow. It is our duty to protect them,” he said.

President Buhari warned that anyone found to be negligent leading to the abductions would be punished in accordance with the law.

“The Federal Government has set up a 12-member Committee to unravel the circumstances surrounding the abduction of the students.”

“The membership of the Committee was drawn from among security agencies and local residents. It is my hope that any agency, person or group found to have been negligent or culpable in the abduction of the girls will be punished�in accordance with the law,” he said.

Enumerating several steps so far taken in the search and rescue of the missing girls, the President described the efforts as the best in the given circumstances, adding that it was a marked departure from the attitude of the preceding administration when 276 Chibok schoolgirls were abducted.

“On 19th February 2018, we woke up to the painful news of the abduction of One Hundred and Ten (110) students of Government Girls’ Science and Technical College, Dapchi. Since this ugly incident happened, I have not left any stone unturned in making sure that the girls are rescued.”

“I have ordered the Service Chiefs and the Inspector General of Police (IGP) to take direct charge and brief me on a daily basis on the efforts to bring back the girls.”

“I have ordered the re-strengthening of a Joint Operational Base involving relevant agencies and Services to coordinate the rescue mission. Consequently, the Service Commanders have not only established a unified Command Centre in Maiduguri, the Military has raised several rescue teams to comb the forests in the North East Theatre of Operation.”

“In addition, the Nigerian Airforce has maintained aerial surveillance of the area. The Federal Government had earlier sent a delegation of senior officials to visit the Governor and the parents of the girls to re-assure them of the measures the government is taking as well as have an on-the-spot-assessment of the incident.”

“The Federal Government’s response to the unfortunate abduction of the schoolgirls is a clear departure from the insensitivity of the past administration which looked the other way while the Chibok girls were taken away in 2014 and held in captivity for over 3 years,” he said.

The President pledged that his administration will remain resolute in the fight against Terrorism and Boko Haram insurgents.

“Nigerians will readily recall that prior to our coming in 2015, the situation was chaotic with violent terrorist attacks being the order of the day.

“Terrorists had made life very unbearable for the people in Yobe, Kano, Kaduna, Borno, Niger, and even the FCT, Abuja. Our Mosques and Churches witnessed daily suicide bomb attacks. Parts of Adamawa and Borno States were helplessly ceded to the terrorists.”

“But today, we have so far shown clear determination in tackling terrorism which is a worldwide phenomenon. We have not only degraded the power and dominance of the criminal elements, our security forces have patriotically exhibited an uncommon zeal in executing their assignment.”

“We explored various strategies including regional and international collaborations to exterminate terror.”

“We have re-equipped our armed forces, security and intelligence Services. They are empowered with improved welfare and better equipment. The outcomes have been good.”

“Our achievement in maintaining security is such that the international community and even our critics commend our modest efforts in this regards.”

“I have ordered a 24-hour brief to me by security agencies on its successes or challenges.”

“While expecting the report of the Committee set up to investigate the abduction for implementation, I have asked that appropriate Federal Government authorities be in constant touch with the Yobe State Government and other neighbouring States to ensure a common strategy and line of action.”

“We are determined to restore peace to all part of the country – from the West to the East; North to the South. While calling for calm, I implore affected parents and families to restrain from making statements that may jeopardize the success of the rescue mission.”

“We are aware of orchestrations by some evil elements to take advantage of the development to score cheap political points. I call on law-abiding citizens to shun activities and statements that may cause a breakdown of law and order.”

“The Government, under my watch, will continue to maintain normalcy and ensure that incidents of this nature are stopped. Be assured that measures are being put in place to achieve these objectives,” he said.

In his remarks, Governor Ibrahim Geidam of Yobe State commended the President for making Yobe and the Northeast safer and expressed the appreciation of the people of the state for the steps being taken by the Federal government to bring back their girls.

He said the goodwill and support for the President in the state remains unshaken despite the recent incident of abductions.