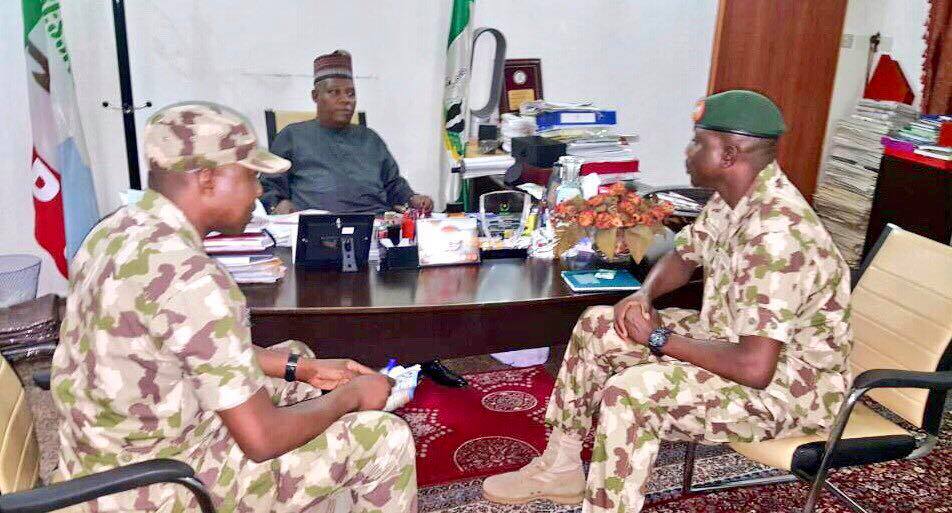 Muhammed Bulama, Maiduguri: At its meeting held on the 15th March, 2018, the expanded meeting of the Borno State Security Council (with their Royal Highnesses the Shehu of Dikwa, the Shehu of Bama, Emir of Gwoza and Emir of Uba, the Honourable Commissioner of Reconstruction, Rehabilitation and Resettlement, and officials from Bama, Gwoza and Kala-Balge LGAs also in attendance), after exhaustive deliberations, resolved as follows:

Sequel to the unfortunate recent attack on Rann town in Kala-Balge LGA by Boko Haram, urgent and immediate measures will be taken jointly by the Borno State Government and the Nigerian Armed Forces and other security agencies to forestall future occurrences there and in other vulnerable communities in the State.

Elaborate security, infrastructural, personnel and logistics arrangements will be put in place preparatory to the imminent return of IDPs to Bama, Gwoza and Dikwa LGAs and the subsequent return of their Royal Highnesses to their respective domains.

To speedily establish structures of civil authority, viz, Local Government Council authorities, para-military agencies, the judiciary and traditional authorities, as pre-requisite to relocating IDPs to their LGAs of origin.

In order to improve on, and enhance existing intelligence gathering techniques, the Nigeria Armed Forces was implored to encourage senior military officers in command positions to closely liase and synergise with traditional rulers in their areas of operation and also endevour to regularly attend the meetings of the security Committees at the LGA level.

All boarding secondary schools in the State with the expectation of those in the Maiduguri and Biu Metropolis will, until further notice, be closed down with immediate effect.

Any person(s) or group found to be collaborating with Boko Haram, no matter how highly placed or highly connected, will be speedily brought to book in accordance with the laws of the land.

On the growing menace of drug abuse;
All stakeholders in the State will be fully mobilized and sensitized to squarely address the problem

All dealers in illicit drugs and substances as well as drug abuse offenders, no matter their position in society, will be speedily brought to book in accordance with the laws of the land.

All premises in the State where the illegal consumption of alcohol illicit drugs and substances, and other vices detrimental to the moral well-being and security of society take place, especially in the Galadima Area of the Maiduguri Metropolis, will be closed down immediately.

Relevant agencies of Government, both State and Federal, will be mobilized and empowered to address the menace constituted to the general public by some operators of commercial tricycle, popularly known as Keke NAPEP.

To sensitize the general public on the importance of obtaining the National Identity Card Number, which is now a pre-requisite for obtaining Voter’s Card and International Passport

The Borno State Government will facilitate the establishment of a biometric data capturing centre for the issuance of Saudi visas in order to ease the anticipated suffering of intending pilgrims to the Holy Land.