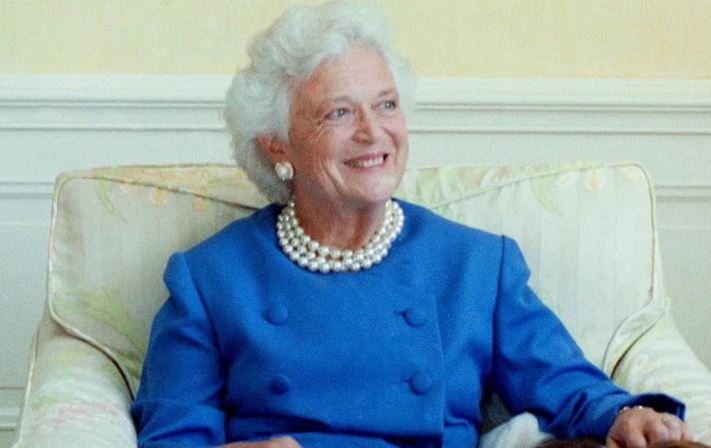 Spokesman for the family, Jim McGrath, announced Barbara’s death on Tuesday evening at the age of 92, after a series of recent hospitalisation.

Trump ordered flags be flown at half-mast in her honour.

The president recalled Bush for her commitment to spreading literacy, and as an “advocate of the American family.”

“She will be long remembered for her strong devotion to country and family, both of which she served unfailingly well,” Trump said in a statement.

Vice-President Mike Pence praised Bush as an inspiration to others, highlighting her devotion to her family.

The Obamas said: “We’ll always be grateful to Mrs. Bush for the generosity she showed to us throughout our time in the White House, but we’re even more grateful for the way she lived her life.

“As a testament to the fact that public service is an important and noble calling; as an example of the humility and decency that reflects the very best of the American spirit”.

Former President Bill Clinton, who defeated George H.W. Bush in the 1992 election, said Bush was a “remarkable woman” who was “fierce and feisty” in support of her family, friends, her country and her causes.

“She showed us what an honest, vibrant, full life looks like,” Clinton said.

Speaker of the House of Representatives. Paul Ryan said: “Barbara Bush holds a revered place in the hearts of generations of Americans. She so loved her family and our country”.

Former Vice President Joe Biden fondly remembered Bush for her wit, intelligence and love of her family and country.

Biden said in a statement: “Her tireless work as a champion for global literacy will be just one legacy she leaves behind.

“The others will be her unshakable faith, her devotion to service and her beloved family, in which she instilled that same great love of country and public service.”

Former Vice President Al Gore, who lost the presidency to George W. Bush, said Barbara was “a pillar of strength for her family and was much admired in our country”.

“Both the wife and the mother of a U.S. President, she will be remembered for her service, pragmatism, and strong, kind spirit,” he said.

“Always a friend to Canada, Barbara Bush leaves a legacy of dignity, grace, service and devotion to family.

“Sophie and I send our deepest condolences to Presidents George H.W. and George W. Bush, their family, and to all Americans,” Trudeau said.

Politicians across the aisles also mourned the death of Barbara, recalling the former first lady for her dedication to her country and family.

The matriarch of the Bush family, Barbara was the second woman to ever have her husband and son both serve as president.

She served as the first lady during the presidency of her husband, George H.W. Bush while her oldest son was elected president in 2000 and served two terms.

Her younger son, Jeb Bush, served two terms as governor of Florida and ran an unsuccessful presidential campaign for the Republican nomination in 2016.