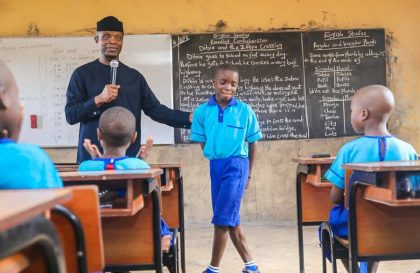 Vice President Yemi Osinbajo, on Friday said that about 7.6 million children in 22 states across the country were being fed daily under the National Home Grown School Feeding Programme (NHGSFP).

Osinbajo made this known in Akure during an interactive session with beneficiaries of the NHGSFP and inspection of the N-Power Programme at Alagbaka Estate Primary School, Akure.

He explained that the purpose of NHGSFP was to ensure that children in public primary schools across the country would have at least one very good meal daily.

The vice president, who had lunch with the pupils, added that the meal would improve the children’s health, boost farming in the country and create job opportunities for some people.

“I have tasted the food myself and I think it is the quite nice,” he said.

Osinbajo said that another set of 300,000 Nigerian youths were to be engaged in the N-power programme.

He explained that the new set of beneficiaries would teach in public primary schools, pointing out that 200,000 graduates were already benefiting from the programme.

He described the N-Power programme as a very compelling testimony.

“I have seen firsthand what the N-Power teachers are doing in the classroom, using tablets to teach. I was able to see it for myself and also use it in teaching the pupils.

“As you know, in the programme, each of the teachers has a tablet which contains materials for teaching and I wanted to see in particular how they used the tablets and the materials.

“I think it’s a very revolutionary thing for all these young men and women who have volunteered to participate in the programme,” he said.

The Ondo Governor, Oluwarotimi Akeredolu commended the Federal Government for the efforts in bringing both programmes to the state.

He attributed the success of the programmes in the state to the positive relationship between the state and the federal government.

“It is rather unfortunate that we are just joining. Our caterers in the NHGSFP are being paid monthly and this has improved the economy of the state.

“The food that is served the pupils which I and the vice president ate was a sumptuous meal.

“I believe we are on course. What we need to do is to ensure that we get more school pupils registered. The federal government is ready to feed them also,” he said.

Earlier, Mrs Grace Ekpemogu, the Headmistress of the primary school, commended the federal government for the programme which she said, would guarantee the pupils one good meal a day.

She said that NHGSFP would help increase the intelligence quotient of the pupils and also go a long way in repositioning the education sector, especially at the primary school level.

Osinbajo also inspected the pilot scheme of the special intervention in energising markets as productive clusters at Isinkan Market, Akure.

The market stalls are fitted with solar panels which supply lights as an alternate source of energy. (NAN)