The Minister of Power, Works and Housing, Mr. Babatunde Fashola, says the National Housing Programme initiated by the Federal Government has yielded its first expected result of creating employment for the youths. 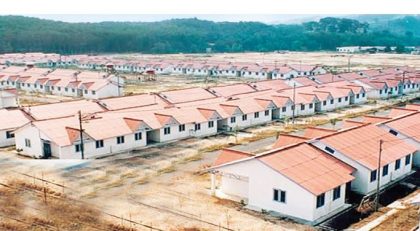 Fashola said this on Friday in Owerri during an inspection of the National Housing Programme site in Imo State.

He said that the programme was initiated as part of efforts by the Federal Government to get the teeming youths across the country back to work.

“The very first thing that we needed to achieve has been achieved; get people back to work, move the economy back to growth and get the economy out of recession.

“From the food vendors to the number of companies that are employed here, you can see building materials; you can see labor and you can see an ecosystem of growth.

“So, goal one is fulfilled, goal two is the completion, goal three is an allocation and we will go step by step,” he said.

The minister said that the last goal of the project which would be the fixing the prices for the houses would be determined when the entire project had been completed.

“We will also determine how much of it is government going to subsidize and how long should they pay.

Fashola expressed satisfaction with the number of employment generated at the site adding that the entire project was being executed in line with the Federal Government’s local content policy.

According to him, there cannot be any content that is more local than it is in this housing project because we insisted that contractors must use made-in-Nigeria products.

The Imo State Commissioner for Housing, Mr. Tony Umezuruike, commended the Federal Government for embarking on the housing project in the state.

Umezuruike said that a project of such magnitude could not be completed without challenges, especially, in the area of land.

The commissioner, however, said that the state government was already in the process of resolving the issues.
“It is actually in progress, people in charge of the process are handling it and in no distant time, the landholding community will smile home,” he said.

Some of the contractors who spoke at the site commended the Federal Government for the National Housing Programme initiative.

One of the contractors, Mr. Francis Ogugwa, said the project had resulted in the employment of over 200 youths from the community.

He attributed the fast pace of work on the project to the Federal Government’s commitment to its funding and called for sustained efforts to ensure speedy completion. (NAN)