Super Eagles, Three Lions of England Friendly: What is at Stake 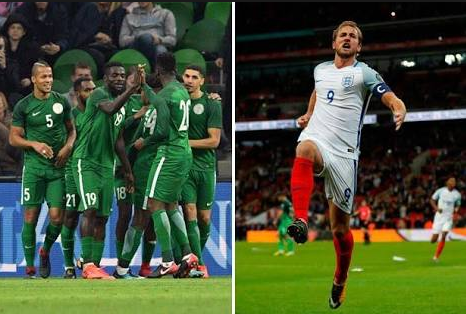 Nigeria and England go toe-to-toe in what promises to be a thrilling Russia 2018 preparatory game for both teams at the Wembley Stadium in London on Saturday.

England hosted and won the FIFA World Cup in 1966, but have only gone as far as the semi finals since then, when Bobby Robson steered a squad including Gary Lineker and Paul Gascoigne to the last four in Italy 28 years ago.

Just like the Three Lions, the Eagles are dreaming of big things to come in Russia, despite both teams being ‘blessed’ differently with intricate opposition in the group stage.

Nigeria must negotiate the obstacles offered by two-time world champions and reigning world vice champions Argentina, hard-as-nails eastern Europeans Croatia and an Iceland squad that stunned England and world football in the Round of 16 at the 2016 European Championship in France. England must sort matters out with strong African opponents Senegal, Japan and Panama.

They have never won the FIFA World Cup, have never even managed to proceed beyond the Round of 16 at the quadrennial tournament, but the Three Lions must beware of a supremely motivated Nigerian squad aiming for the heights in Russia.

A proactive, diligent and equally ambitious NFF leadership signed a landmark agreement with the team on FIFA World Cup funds as far back as November last year, and the process is on to credit the account of the players with what is due to them, more than two weeks before their first match against Croatia in Kaliningrad.

“The most important thing about the World Cup is not the money. But I must admit that the fact that the money is there and we know is there gives us extra energy, extra motivation in the preparations,” forward Kelechi Iheanacho told thenff.com. 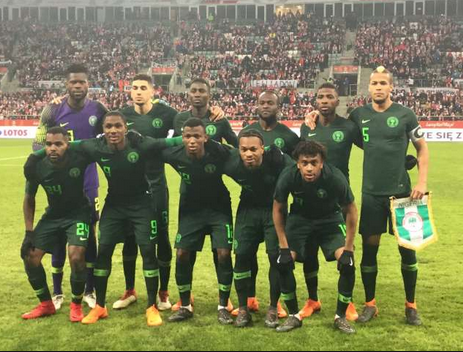 On Thursday night, at a brief event at the Transcorp Hilton Hotel in Abuja, Senate President Bukola Saraki spurred the team on with a cash gift of $50,000, and with a pledge of ‘special package’ for every unreplied goal at the World Cup finals in Russia.

On Friday morning, the contingent met with President Muhammadu Buhari at the Federal Council Chambers, and his words that they should go and fight with their spirit as the whole nation is behind them, are still ringing in the players’ ears.

After bidding President Buhari farewell, the delegation was flown to London aboard a luxury jet, and will train for the big match at the Wembley on Friday, between 5pm-6pm.

Skipper Mikel John Obi told thenff.com: “We are in England, a terrain most of us know too well. I was here and won several trophies with Chelsea, including the Champions League. It will be an interesting encounter on Saturday.”

In truth, a high percentage of the travelling Nigeria party are familiar with the United Kingdom. Wingback Victor Moses recently won the FA Cup with Chelsea FC, the west London club where Mikel Obi achieved great things; Wilfred Ndidi is reverred at another side Leicester City where he won the Young Player of the Year for the second successive season; Iheanacho is also at Leicester City; Alex Iwobi is with north Londoners Arsenal FC; Olaloluwa Aina is with Hull City; Ahmed Musa only recently left Leicester City; Odion Ighalo was a star at Watford FC before leaving for China last year and; Kenneth Omeruo is officially with Chelsea even though he has been on loan in Turkey.

Iheanacho said simply: “England’s players know us and we know them. It will be a good match.”

Manchester United’s Jesse Lingard will start for England in Saturday’s friendly against Nigeria and manager Gareth Southgate believes there is no reason why he can not play alongside Dele Alli.

Lingard, who usually operates in an attacking midfield role, scored 13 goals for Manchester United last season in all competitions —- his most productive campaign yet at Old Trafford.

While some observers believe the 25-year-old is competing for the same spot in the England side as Tottenham’s Alli, Southgate says that is not the case.

“I don’t see it as a straight contest between any individual. Absolutely, they can play together,” Southgate told a news conference ahead of the match scheduled for the Wembley Stadium.

“All of our attacking players have different attributes or strengths. Jesse is a fantastic player at recognising the space, working away from the ball, a great link between midfield and attack,” he said.

But Southgate gave no clues as to who would start in goal for England with Jack Butland, Jordan Pickford and Nick Pope the three goalkeepers in the World Cup squad.

“We know what we want to see in that area and we’re clear on what we think. There’s no need for me to say too much on that publicly,” said Southgate.

“I’ve told the players what we’re looking for in these two matches and haven’t told them the team yet.”

Southgate added that Manchester United central defender Phil Jones would miss the Nigeria match after he was allowed to leave the training camp as his partner was due to give birth.

Much media attention in England has been focused on forward Raheem Sterling’s new tattoo which features an assault rifle and which was described as “disgusting” by anti-gun campaigners.

Sterling said the tattoo had a “deeper meaning” adding that he would “never touch a gun in my life” and Southgate defended the player.

“Tattoos are very personal. A lot of our players have tattoos and they are wrapped up in a lot of deep stories.

“I don’t see why we should be involved in policing that,” said the England manager.

The Three Lions kick off their World Cup campaign in Russia against Tunisia on June 18 and also play Panama and Belgium in Group G.