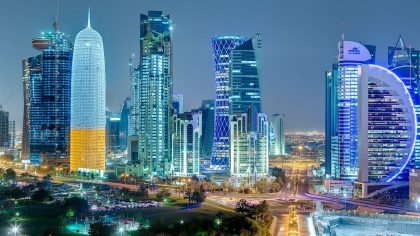 Qatar’s foreign minister told Al Jazeera he did not think the Saudi threat – reportedly made in a letter to France – was serious.

But he accused Riyadh of using the letter to try and create a “disturbance” in a region already rocked by a year-long stand-off between Doha and other powers.

The newspaper added that the king had said Saudi Arabia was ready to consider all measures, including military action.

“We are seeking formal confirmation from the French government (about the letter),” Foreign Minister, Sheikh Mohammed Al-Thani, told the English-language channel of Qatar-based Al Jazeera in an interview aired on Tuesday.

“There is no serious military threat out of this, but the way it is being used to justify or to create a disturbance in the region is just unacceptable,” he said.

“There is no legitimate grievance behind this letter and threatening Qatar.”

Qatar denies the accusation and says the boycott is an attempt to impinge on its sovereignty.

The French president’s office and the Saudi government’s communications office have not responded to requests for comment on the newspaper report.

Qatar and Russia signed an agreement on military and technical cooperation last year.

Qatar’s ambassador to Russia was quoted as saying in January that it was in talks to buy the Russian S-400 missile air defense systems.

Washington has strong alliances with both sides and fears the split among Sunni Muslim U.S. allies could benefit Shi’ite Muslim Iran.

Qatar hosts Al Udeid Air Base, which is home to more than 11,000 U.S. and coalition forces. (Reuters/NAN)